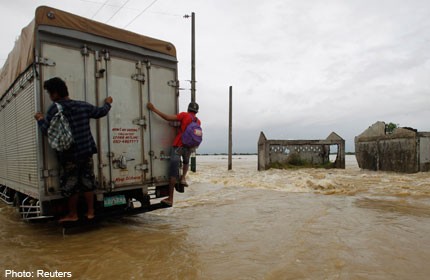 MANILA - 13 people were killed and more than two million are without electricity as typhoon "Santi" (international codename: Nari) pummelled Luzon.

Santi tore into the country's northeast coast around midnight (1600 GMT Friday), toppling trees and pylons as it cut a westward swathe through the farming regions of the main island of Luzon, officials said.

"While there were relatively few casualties, a lot of areas are still flooded," said Eduardo del Rosario, head of the National Disaster Risk Reduction and Management Council.

In a press conference earlier on Saturday, National Disaster Risk Reduction and Management Council spokesman Major Rey Balido said four were reported missing: Three fishermen from Catanduanes and one from Dingalan in Aurora.

Witnesses in the coastal town of Baler, near where Santi made landfall, said many large trees had been felled and clean-up crews with chainsaws were clearing roads.

Military and police rescuers trucked residents out of flooded villages as the weather improved after the typhoon's 120 kilometers (75 miles) per hour winds swept out to the South China Sea later Saturday morning.

Government clerk Glenn Diwa, 34, said she and her husband spent a sleepless night as the typhoon roared through the town of Capas, 90 kilometers (55 miles) north of Manila, shortly before midnight.

"The wind was very strong and there was a whistling sound. After a while we heard torn roofing sheets clattering across the yard," she told Agence France-Presse.

As Santi dumped rain inland, a wall of mud fell on a police barracks near the town of Magalang, killing an officer awaiting deployment to rescue typhoon victims, Balido said.

Elsewhere in central Luzon, an elderly woman and four minors were crushed to death when trees crashed onto two houses and a vehicle, while the wall of a school collapsed and crushed an old man to death.

Two children and an elderly person drowned in a flooded village, while the body of a fisherman who had gone to sleep in his boat on shore the previous night was recovered at sea, Balido added.

Another man was electrocuted by a loose power line while yet another died of a heart attack in an incident that disaster officials also blamed on Santi.

Three other fishermen who put to sea before the typhoon have also failed to return, Balido said.

He said nearly 6,000 people moved into government-run shelters amid warnings their communities could be hit by flooding and landslides from the typhoon.

"The wind picked up very quickly, very dramatically. We had the wind coming right off the ocean for four hours," said one witness on the east coast.

Even as the weather improved, floodwaters continued to rise in low-lying areas as rain from the nearby Sierra Madre Mountains swept downstream through swollen rivers.

In the town of San Ildefonso, 60 kilometers from Manila, police pulled a woman on a motorbike and a farmer to safety after they were nearly swept away while separately crossing a street that had turned into a raging river.

Farmer Frankie Gracia, 30, told AFP he had been forced to butcher one of his pigs after it fell ill from exposure to the rain, and he had wanted to take some of the pork to his relatives across the street.

"I needed to reach the other side soon, otherwise the meat would spoil," he said.

Road and utility crews were out clearing roads and restoring power, but it could take up to two days before electricity is restored and major highways are reopened to traffic, Nigel Lontoc, a disaster official for the region, told Agence France-Presse by telephone.

NDRRMC also reported that 2,302 persons pre-emptively evacuated in 57 villages in the regions of Cagayan and Central Luzon.

About 3,000 people moved into government-run shelters before the typhoon struck amid warnings of flooding and landslides, Lontoc said.

Seventeen villages in Bulacan, a province that lies next to Manila, were under up to 1.2 meters (four feet) of floodwater, he added.

Balido and Lontoc said local officials were tallying the number of damaged homes, many of which had their roofing blown off.

The typhoon spared the capital Manila, where the state weather service had warned on Friday about possible widespread flooding.

No major floods have been reported in the metropolis of more than 12 million people.

After sweeping across the Philippines, Santi blew out to the South China Sea with peak winds of 120 kilometers (75 miles) an hour, the state weather service said.

Projections from the Hong Kong Observatory had the storm gathering pace over the coming days as it heads towards the northeast coast of Vietnam.

The Philippines is hit by about 20 major storms or typhoons each year that occur mainly between June and October.