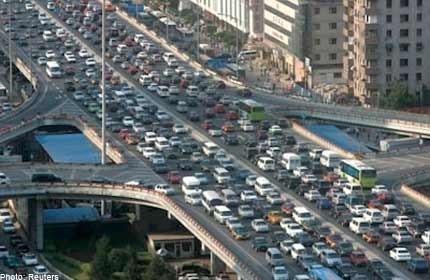 Many complain of traffic jams, overcrowding during holidays

Zhang Ji usually plays badminton with his colleagues on Saturdays at the Beijing University of Technology stadium.

But not this week, because they have to work according to a revised holiday schedule.

"This Saturday has become a working day because of the week-long National Day holiday," said Zhang, who works for a State-owned oil company.

Zhang is not the only one annoyed about the Golden Week arrangement that means people have to work extra weekends in exchange for the seven-day break.

An online survey by the China National Tourism Administration found that nearly 60 per cent of the people interviewed said they would like to see the National Day Golden Week abolished, citing traffic jams and overcrowding during the holiday.

Cai Jiming, a professor at Tsinghua University and the head of a research group on holidays, supports abolishing the current arrangement.

"It has broken people's daily routine on a weekly basis," Cai said. "It also violates the public's legal right to work only five days a week. The current practice does not give you extra days off. It just puts separate days off together to make for longer holidays."

Nearly 40 per cent of those surveyed said they wanted the Golden Week to remain, as it provides people with a rare long break for them to travel with their families.

"I wouldn't have the chance to take my children and parents sightseeing if it were not for this long holiday," said Lu Xi, a civil servant who took her parents to Hong Kong during the National Day holiday week.

The China Tourism Academy says the number of tourist trips during the October Golden Week reached 430 million, up 18 per cent compared with the same period in 2012.

Huge numbers of tourists have placed a heavy strain on roads, scenic spots and hotels.

However, some experts suggest keeping the Golden Week, citing the lack of a flexible holiday system.

"I don't think canceling the current seven-day arrangement will help. It's the shortage of holidays that has forced the public to travel at the same time," Zhang Hui, professor of tourism management at Beijing Jiaotong University, told China Daily on Friday.

With a seven-day break around the May Day holiday scrapped in 2008, Zhang said paid annual leave is one of the answers to the Golden Week chaos, but it hasn't been widely established so far.

"With a flexible paid annual leave system in place, people could arrange their own travel plans without flocking together."

The State Council, China's Cabinet, in February announced a new programme promoting tourism. It says a paid annual leave system will be set up by 2020.

Zhang suggested that before 2020 the country be divided into three regions, with residents in each taking turns to take long holidays to avoid travel peaks.

Christina Zhang, who has worked in China and Britain, said the Golden Week causes chaos as people travel at the same time.

In Britain, a flexible annual leave system - which includes at least 20 days of annual leave and 8 days of public holidays - means that demand for travel is spread out, Zhang said.

"It is popular for employees in Britain to take leave at Christmas and the New Year and during school holidays. However, employees in the UK can normally decide when to take the majority of their holiday entitlement," Fisk said.