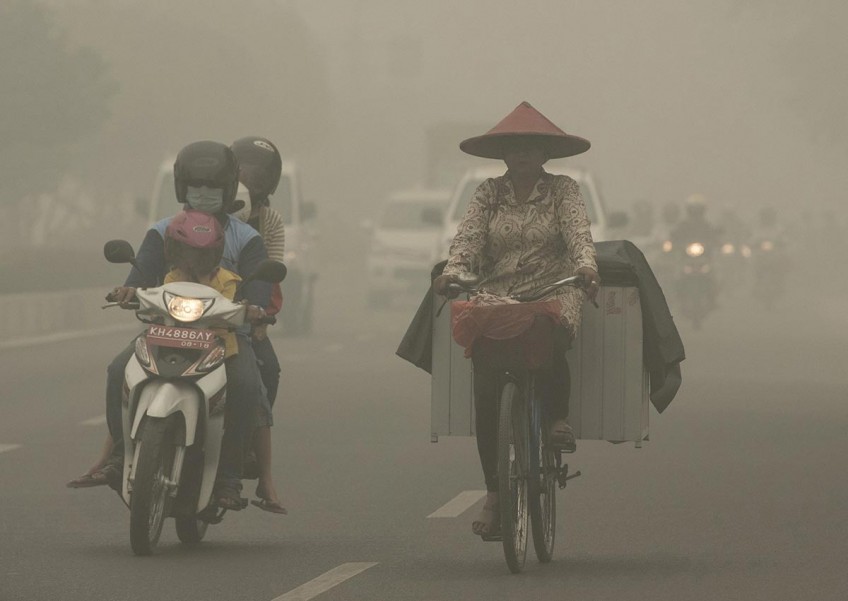 JAKARTA - Indonesian forest and agricultural fires cloaking Southeast Asia in acrid haze are spewing more greenhouse gases into the atmosphere each day than all US economic activity, according to an environmental watchdog.

The shock assessment came as Jakarta said the number of blazes was increasing across the archipelago despite a multinational fire-fighting effort, and announced plans to deploy more water-bombing aircraft.

For nearly two months, thousands of fires caused by slash-and-burn farming have suffocated vast expanses of the region with smog, causing respiratory illnesses to soar, schools to close, and scores of flights and some international events to be cancelled.

Much of the burning is in tropical peatlands rich in carbon but which are being drained and cleared at a rapid rate to make way for agriculture, particularly fast-expanding palm oil plantations.

The World Resources Institute said in a recent report that since early September carbon emissions from the fires had exceeded average US daily output on 26 out of 44 days.

The United States is the world's second-largest greenhouse gas source after China. The WRI, a US-based research organisation that focuses on environment and development issues, normally classifies Indonesia as the fifth-biggest emitter.

"The burning of tropical peatlands is so significant for greenhouse gas emissions because these areas store some of the highest quantities of carbon on Earth, accumulated over thousands of years," said the WRI.

"Draining and burning these lands for agricultural expansion, such as conversion to oil palm or pulpwood plantations, leads to huge spikes in greenhouse gas emissions." In its report, the WRI used findings from the Global Fire Emissions Database, which uses satellite information to estimate emissions from blazes.

The smog crisis is escalating as world leaders gear up for talks beginning next month on a climate rescue pact, which will seek to limit global warming to two degrees Celsius (3.6 degrees Fahrenheit) over pre-Industrial Revolution levels.

The fires and resulting region-wide blanket of smoke occur to varying degrees each year during the dry season as land is illegally cleared by burning, regularly angering Indonesia's smog-hit neighbours Malaysia and Singapore.

Malaysia, which in recent weeks has repeatedly ordered school closures across several states as a health precaution, did so again on Wednesday for the third straight day as pollution levels climbed.

Popular Thai holiday islands have also been affected with the haze forcing several planes packed with beach-bound tourists to turn back earlier this month.

While the loudest complaints have come from leaders in relatively affluent Singapore and Kuala Lumpur, it is poor Indonesian villagers who are suffering most.

One of the worst-hit areas, Palangkaraya, on Borneo, has been engulfed in thick, yellow haze, which has drastically reduced visibility and pushed air quality to more than six times "hazardous" levels.

Experts warn the current outbreak is on track to become the worst ever, exacerbated by bone-dry conditions caused by the El Nino weather phenomenon.

The fires on the huge islands of Sumatra and Borneo are typically only brought under control by November with the onset of the rainy season.

But Herry Purnomo, a scientist at the Indonesia-based Center for International Forestry Research, told AFP this week that climatology data indicated the rainy season may be delayed this year and that the fires could last until year-end.

Indonesia earlier this month agreed to accept international help after failing for weeks to douse the fires and last week launched its biggest fire-fighting push yet, with dozens of planes backing up thousands of personnel on the ground.

But the national disaster agency said the number of "hotspots" - areas detected by satellite which are already ablaze, or ripe to go up in flames - had risen to more than 3,200 and spread to the eastern Papua region, which is usually largely unaffected by fires.

Authorities hope to deploy a further 10 to 15 water-bombing planes, which will join about 30 aircraft already fighting the blazes. Singaporean and Malaysian aircraft have taken part in the operations, while two Russian planes arrived Wednesday to provide assistance.