The cauldron has been built at the main stadium for the SEA Games.

MANILA - A cauldron costing more than S$1 million that will hold the SEA Games flame has drawn anger in the Philippines, sparking comparisons to the excesses that epitomised the Marcos era.

Critics in the Philippines, which is hosting the South-east Asian Games in and around Manila from Nov 30 to Dec 11, have said the 50 million pesos (S$1.34 million) would have been better spent helping the nation's children and poor.

The 50-metre cauldron has been built at the main stadium in Clark, north of Manila, for the regional Games.

"Do you realise that at one million (pesos) per classroom, we can construct 50 classrooms? In other words, we did away with 50 classrooms in exchange for one 'kaldero'," said lawmaker Franklin Drilon, using the Filipino word for a cooking pot.

An ally of President Rodrigo Duterte, lawmaker Joey Salceda, said that while "the cost looks reasonable, it comes across as Imeldific and signals grandiosity".

"Imeldific" is a term born of the worst excesses of the reign of dictator Ferdinand Marcos and his wife Imelda, when billions disappeared from state coffers.

One of the symbols of that time was Imelda's collection of more than 1,000 pairs of shoes, which was revealed after the family was forced to flee into US exile by a popular uprising in 1986.

The Marcos link to the cauldron extends to its designer, architect Francisco 'Bobby' Manosa, an Imelda favourite who drew up her so-called 'Coconut Palace'. 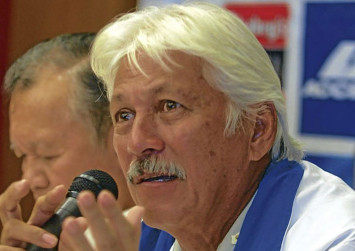 The building was constructed in Manila of indigenous materials and was intended to house visiting dignitaries, but became just another symbol of Marcos excess.

As the anger over the cauldron has built, Duterte himself waded into the fray saying there was no "corruption" behind the high cost.

"It is a product of the mind. You cannot estimate how much money you lost because it is the rendition of the mind of the creator," the president told reporters.

"It's a work of art," he said. "We see the athletes, we see the burning flames that represent hope and the fighting spirit. We think it is just appropriate."