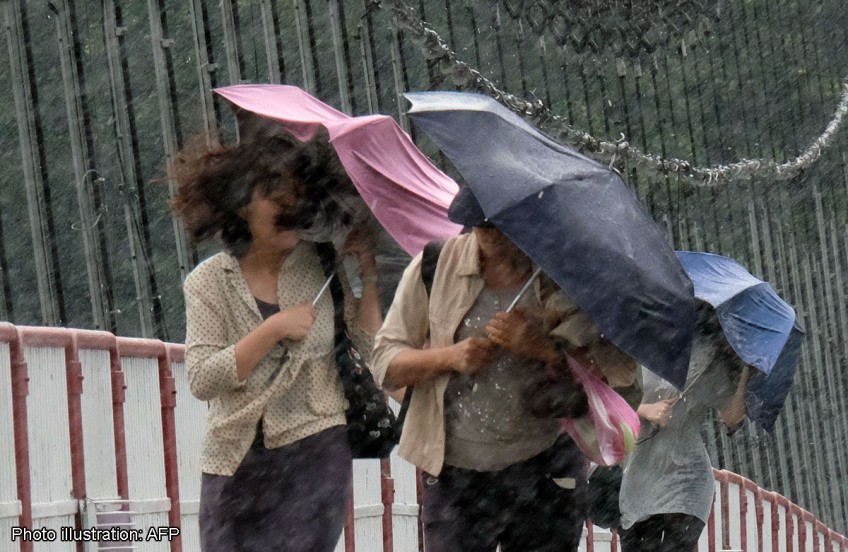 Local residents walk on a suspension bridge in the New Taipei City as typhoon Neoguri struck near eastern Taiwan earlier this month on July 8. The CWB said Typhoon Matmo is approaching the Bashi Channel between Taiwan and the Philippines at a speed of 23 kilometers per hour

The CWB said Typhoon Matmo is approaching the Bashi Channel between Taiwan and the Philippines at a speed of 23 kilometers per hour, adding that a land warning is expected to be issued today and the storm is expected to make landfall on the island early Wednesday.

Hsieh said that if the typhoon lands in Yilan, it will leave the country sooner, adding that if it lands near Hualien, then the typhoon will stay longer on the island due to the county's landform.

Hsieh went on to say that should the speed and route of Typhoon Matmo remain the same, then it will leave the island in the second half of the day on July 23 at the earliest.

The Executive Yuan yesterday afternoon held a meeting to urge all related governmental agencies to take extra precautions ahead of the typhoon's arrival.

Officials from the Ministry of the Interior (MOI), Transportation Ministry, Ministry of National Defence (MND) and the Council of Agriculture were urged to take measures against possible flooding and prepare for the potential evacuation of residents living in disaster-prone areas, the Cabinet said.

The COA said that the average price of vegetables has increased to NT$33.4 (S$1.38) per kilogram due to the anticipation of price hikes in typhoon season, noting that, however, the council has prepared a stock of 5,000 tons of vegetables to meet market demand.

Following the sea warning, the Transportation Ministry's Maritime and Port Bureau (MPB) yesterday announced that all voyages to outlying Green Island and Orchid Island for today and tomorrow will be cancelled. According to the Central News Agency, more than 3,000 tourists' schedules are affected by the cancellation.