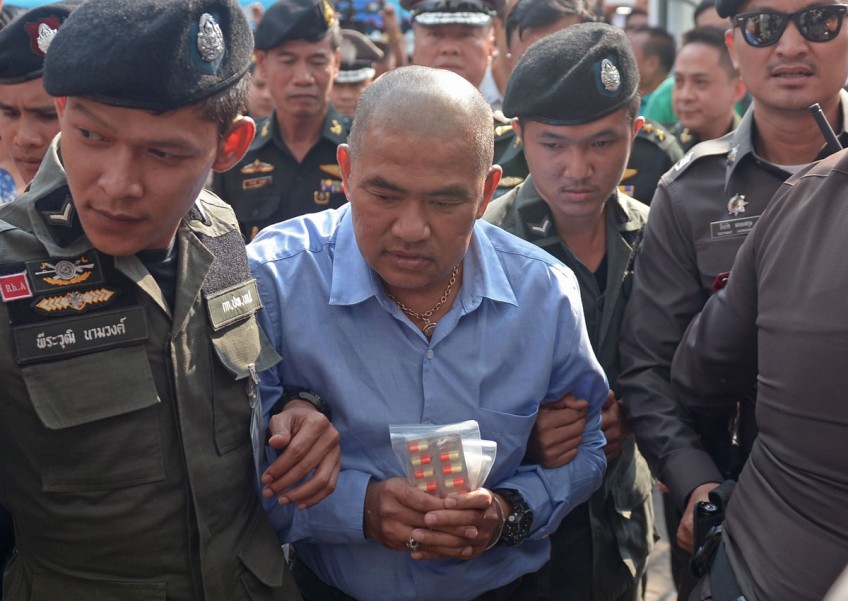 Suriyan Sujaritpolwong had been accused of seeking commissions while organising a royal cycling event in August. Thai media reports have also linked him to a scandal involving a billion-baht army project.
AFP

BANGKOK - Thailand Justice Minister Paiboon Kumchaya looked decidedly uncomfortable last week when he announced before reporters that a famous astrologer who had been detained on lese majeste charges had died in custody.

Suriyan Sujaritpolwong, who had been accused of seeking commissions while organising a royal cycling event in August, died of a blood infection, he announced.

He died in a windowless cell on military grounds - the second lese majeste suspect to have perished in a fortnight. The revelation has thrown the nation into intense speculation. Most of it is taking place in hushed tones because of the draconian law against any insult of the monarchy. Yet, the deaths have spooked even pro-military quarters and - coupled with an unravelling scandal involving a billion-baht army project - have put the military government on the back foot.

"Even supporters of the military are questioning this," said political scientist Titipol Phakdeewanich, a visiting fellow at Warwick University's Centre for the Study of Globalisation and Regionalisation. "They want to see more transparency."

Insulting or defaming the monarchy in Thailand is an offence that carries a prison sentence of up to 15 years. Suspects are rarely granted bail pending trial.

The government has tightened the policing of potentially offensive comments since coming to power through a coup last year and now requires lese majeste cases to be handled by military courts.

Yet, even by those standards, its handling of the most recent lese majeste case has raised eyebrows. Suriyan, a former aide to Crown Prince Maha Vajiralongkorn, disappeared from public view days before he was taken to the military court with his head shaven. He was produced in public alongside his aide, Jirawong Wattanathewasilp, as well as senior police officer Prakrom Warunprapa, who were similarly accused of lese majeste.

All three were detained in military facilities instead of a prison. Prakrom was found hanged with his own shirt last month, a death which officials deemed a suicide. Rumours were so consuming after Suriyan's death that officials had to publicly deny that the third detainee had also died. "What has spurred doubts in (these) two cases of death was the fact that both bodies were incinerated right away, without any proper funeral rites," the Thai Lawyers for Human Rights advocacy group said in a statement. There has also been no inquest.

Meanwhile, Thai media reports have linked Suriyan to a military officer who was involved in the construction of a billion-baht park in the coastal district of Hua Hin. The 32ha Rajabhakti Park, featuring giant statues of seven former kings, was opened personally by the Crown Prince. It was overseen by the army and financed largely by donations from corporations and entities such as telecommunications company True and the Metropolitan Electricity Authority. Initial police investigations into the project's alleged financial irregularities appear to have taken a backseat since the army declared last week it would conduct its own probe.

But that was not before former army chief Udomdej Sitabutr admitted that a middleman tasked to liaise with foundries had collected commissions. This businessman has since returned the commissions as a "donation", he said.

Defence Minister Prawit Wongsuwan dissociated the government from the project. "The government was not involved… it's the army's responsibility," he said on Monday. Analysts say his rebuttal has done little to ease doubts, given how much the lines have blurred between the military and the government since the coup.