An ayahuasca ceremony at an undisclosed location.

"As I shuffle into a more comfortable position, my body starts to melt into the mattress and my visions become more intense. I helplessly mumble, 'Please make it stop', but it's no use. Mother ayahuasca hasn't finished with me yet."

So writes Lee Walpole, whose curiosity about ayahuasca was sparked when he watched a YouTube documentary on the ancient Amazonian concoction. Ayahuasca has been used as a spiritual healing medicine for thousands of years and is ceremoniously administered by shamans.

In an attempt to boost his energy levels and sharpen his mind while working for a British tabloid newspaper, the 32-year-old Briton had been popping pills.

"Nootropics [smart drugs] and amphetamines were a choice," he says. "They kept me awake and alert. While my family thought I was addicted to the pills, I always felt I could stop at any time. Still, there was something in the back of my mind that made me wonder where a spiritual journey could take me." 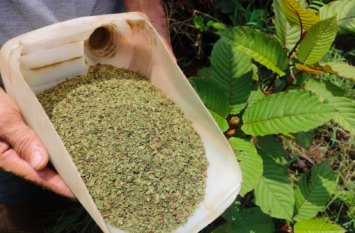 Walpole was attending a wellness retreat in Thailand when a casual chat with another participant turned to the subject of ayahuasca. The main hub for ceremonies is the Amazonian regions of Peru and Brazil, which every year welcome thousands of people hoping to achieve spiritual awakening - often described as a rebirth.

It is produced using a jungle vine and can be smoked in a pipe or made into a bitter-tasting brew, producing the hallucinogen dimethyltryptamine (DMT), a substance that is outlawed in most parts of the world.

As a result, the retreats are shrouded in secrecy and hard to come by in Asia, but Walpole's new wellness buddy gave him contact details for a shaman in Thailand. (The ceremonies are also known to be held in India.)

Given the non-legal status of DMT, those wanting to take part in a retreat in Asia may be told to turn up at a secret checkpoint, where they are greeted by the facilitator, or shaman.

"When I came to the checkpoint in Phuket, it was just me, the shaman and another participant," says Walpole. "The other guy looked nervous, but later explained how he had struggled with the pre-ceremony diet and preparations."

"We were also told to bring a pillow, blanket and a change of clothes as we'd be staying the night. Our temporary residence was cosy, with a floor-to-ceiling glass wall which overlooked the treetops in the mountains. Not quite the Amazon rainforest, but it was close enough for me," he says.

Another item on the list of things to bring was a bucket. Vomiting is almost inevitable when taking ayahuasca. It is not nicknamed "La Purga" [the Purge] for nothing.

"Twenty minutes after I had taken the first shot, I was laying down with my eyes closed, focusing on my breath; I could feel the dark and slimy elixir making its way through my body, and I could hear the guy next to me start to vomit violently," Walpole recalls.

"Another 10 minutes passed and little geometrical patterns started to appear before my eyes. I remember thinking, 'It's happening'."

"The pattern of activity in Asia is part of a global pattern," he says, referring to the secrecy surrounding the events. "Even though we cannot do any advertising in Asia, we see an increasing interest in [ayahuasca], especially in countries with a receptive culture that accept and embrace the concept of personal healing, as well as in countries where subcultures thrive."

The controversy surrounding ayahuasca is a difference of opinion over whether DMT should be regarded as a powerful medicine, as the shamans insist, or listed as a dangerous drug.

Roberto says it is regrettable that DMT is still listed as the latter under the United Nations Convention on Psychotropic Substances and that the treaty has not been revised since 1971.

"There is no intelligence behind conventional drugs. They only have a physiological effect, whereas with ayahuasca, we have a native intelligence that guides the healing with wisdom. The decision to attend an ayahuasca retreat or ceremony is not one that should be taken lightly," Roberto says.

"It is vital that people are well-informed and never go to a retreat to seek entertainment. As for us shamans, many people think it's enough to play a bit of guitar and brew the medicine, but so many skill levels and so much depth go into the preparation to become a shaman, and it requires discipline and sacrifice."

One person who has undergone such preparation is aspiring shaman Karen Farini. After attending no less than 16 ceremonies in Asia between 2016 and 2018, including in India, she felt a calling to go deeper.

"Mother Ayahuasca herself kept telling me this was my path and I felt it from deep within," says Farini, who is from Britain and is currently travelling around the globe.

"I suddenly wanted to get rid of my belongings and the house I lived in, and just follow the call far away to see where it might lead.

"Studying the medicine is a very challenging process, as I would soon discover in Peru," Farini adds.

"You have to spend months in solitude in the jungle, dieting with various plants and master trees, and eating very bland, simple food such as rice and potatoes. You drink a concoction brewed from the bark of a master tree and slowly, over time, you begin to attain teachings and knowledge from their spirits.

Beijing resident Penny Atkinson had been struggling with depression and anxiety for years, and had tried various conventional treatments, including antidepressants, but nothing helped.

"I have never been a very spiritual person, but I decided to browse a bit online after a friend told me about ayahuasca," Atkinson says.

The Hummingbird Healing Centre in Iquitos, Peru was one of the centres recommended, so she signed up for a 12-day retreat that included six ayahuasca ceremonies. The first one was not a pleasant experience.

"You naturally panic a bit the first time because you feel out of control, although you're in a comfortable environment," she explains. "The taste of the brew is horrible and the physical discomfort you feel is quite significant. Your body wants to reject it."

Atkinson experienced no vivid hallucinations the first time, but her visions became stronger and stronger. By the sixth ceremony, she saw herself dying and wept loudly because she was sad that she had died.

She had violent visions of being abused and killed, and observed her own body being dragged away, after which it started decomposing. As the effect of the ayahuasca wore off - normally taking between four and five hours - Atkinson was finally at peace and convinced she had gone to heaven. As she was gently woken up by the facilitator, she sat up and shouted: "My name is Warrior Penny."

Your life may or may not change after ayahuasca. The Hummingbird Healing Centre warns that "ayahuasca healing is not a cure-all or magic bullet. The most important factor we have seen for getting positive results with this medicine is the individual's level of commitment to their own healing".

While some of Atkinson's new-found friends from the retreat experienced resolution, she came to more of a realisation. "The main thing I learned is that I'm actually not broken. I'm just a human being trying to cope. I've learned to stay positive and I don't feel that things are hopeless and pointless like I used to," she says.

Atkinson feels she has more to uncover and is planning a second trip to Peru.

Walpole is also keen to attend a second ayahuasca retreat. He still struggles at times but his first retreat was significant to him.

"After ayahuasca, I questioned my need for the amphetamine pills. I had some on me on the day of the retreat, but as I cycled back to Phuket I threw them away and I've never looked back," he says. "I feel much less paranoid and less agitated now."