Secret North Korean missile base Sino-ri found - and there could be 19 more, say researchers

Researchers have uncovered another secret operational ballistic missile base in North Korea - one of approximately 20 undeclared missile sites in the country - according to a new report released on Monday.

Beyond Parallel, a research project conducted by the Washington-based think tank Centre of Strategic and International Studies, identified the site as Sino-ri, a missile operating base that houses a regiment-sized unit equipped with Nodong-1 medium-range ballistic missiles.

CSIS researchers had previously identified 13 of the estimated 20 undeclared missile operating sites in November last year, which drew concerns among nuclear experts that the hermit country may not be winding down its nuclear arsenal.

"[We] have to negotiate [North Korea's] existing [nuclear] capabilities," Victor Cha, one of the authors of the report and senior adviser and Korean chair at the CSIS, urged on Twitter after its release. "Not just past [disclosed] or future ones." 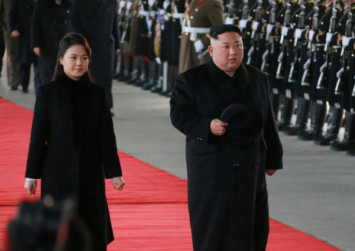 The newly discovered site is also reported to serve as the headquarters of the Nodong missile brigade, part of country's Strategic Rocket Forces, the report said, and may also play a role in Pyongyang's newest Pukkuksong-2 ballistic missile development.

Located 212 kilometres (132 miles) north of the demilitarised zone between North and South Koreas, the Nodong missiles deployed at the base could target the Korean peninsula and most of Japan with "an operational-level nuclear or conventional first strike capability", the report said.

It has never been declared by North Korea.

The discovery comes as the US and North Korea are coordinating a second summit between US President Donald Trump and North Korean leader Kim Jong-un.

The White House announced last Friday that the two leaders would meet in late February, following the first Trump-Kim summit, which took place in Singapore in June last year. Hanoi, Vietnam's capital has been widely reported to be the potential location.

Over the weekend, Trump expressed optimism about his upcoming summit with Kim.

"Kim Jong-un is looking very forward to it and so am I," Trump said.

"We have made a lot of progress as far as denuclearisation's concerned," he claimed. "Things are going very well with North Korea."

Harry Kazianis, director of defence studies at Washington-based think tank Centre for the National Interest expressed concern over the new findings, but noted that they would likely be "already known to the US or South Korean intelligence services".

"The discovery of this missile base or that weapons facility reinforces the danger presented by North Korea," Kazianis said.

Pyongyang has enough weapons-grade material to arm as many as 65 nuclear warheads and has over 1,000 missiles, along with chemical and biological weapons, he said.

"You can't 'wing' the next [Trump-Kim] summit," Cha warned in a reference to the ongoing nuclear talks, which have yet to yield substantial steps towards denuclearisation.