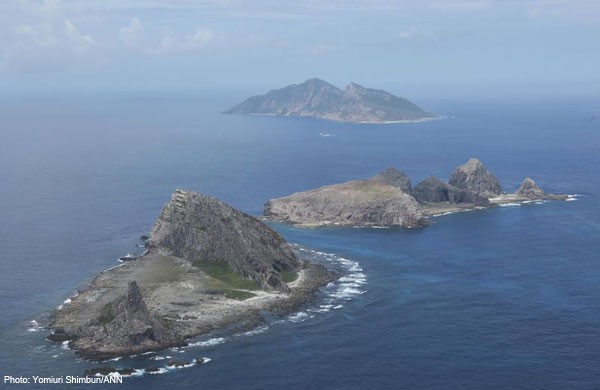 Photo shows three of the Senkaku Islands on Sept. 6: from foreground, Minami-kojima, Kita-kojima and Uotsurijima.

On Sept. 11, 2012, the government purchased three of the Senkaku Islands, which are Japan's sovereign territory, from the then owner and nationalised them. China, which claims territorial rights over the islands in Okinawa Prefecture, reacted fiercely. Since then, China has repeatedly engaged in dangerous, provocative behaviour against Japan. The Yomiuri Shimbun has traced the confrontation between the two countries over the remote East China Sea islands. The following is the first instalment of the series.

Japan must return to China all the territories it has stolen, Chinese Premier Li Keqiang said during his May 26 visit to the historical city of Potsdam, Germany. At the site of the 1945 Potsdam Declaration, which set the terms for Japan's unconditional surrender at the end of World War II, Li criticised Japan with strident words.

For China, the site of the Potsdam Conference was the most appropriate place to spread the image of "a Japan that challenges the postwar international order" to the world.

The reasoning behind China's demand for Japan to "return" the Senkaku Islands can be summarized as follows:

-Japan took the Senkakus from China during the Qing dynasty.

-Japan, defeated in World War II, must return the land it stole to the original holder states.

-Therefore, Japan does not possess territorial rights over the Senkakus.

It is important for China to launch a "propaganda war" to spread its argument to the world. Its approach is to "use all possible means."

The Olympic Games, which should be a festival of peace, is no exception.

"Japan will have to keep a low profile before the Olympics to avoid any military conflicts [with China]. This will guarantee the stability and peace of the East China Sea, which will be beneficial to the whole of East Asia," wrote the Global Times on Sept. 9, just after Tokyo was chosen as the venue for hosting the Olympic Games and Paralympic Games in 2020. It criticised Japan over heightened military tension with China over the Senkaku issue. The paper, published under the auspices of the People's Daily, is an official organ of the Chinese Communist Party.

China has been waging an extraordinary propaganda war against Japan. An incident in autumn last year shocked Japan's Foreign Ministry.

Advertisements criticising Japan were carried around the world in such major newspapers as The Washington Post and The New York Times, one after another. They included newspapers in surprisingly small or lesser-known countries including an island nation in the Pacific and a country in Africa, according to a senior ministry official.

One of them was Ichiro Komatsu, the incumbent director general of the Cabinet Legislation Bureau, who was dubbed "Mr. International Law" because of his expertise on international law. Last year, when he served as Japan's ambassador to France, he assembled French journalists and explained in detail, in French, that Japan's territorial possession of the Senkaku Islands poses no problems under international law.

Keiichi Hayashi, the ambassador to Britain, contributed a commentary to the Nov. 14, 2012, issue of the Financial Times of Britain with the headline: Time for China to calm down and stop bullying.

The commentary contains important keywords: "Japan stands firm and calm against China's attempt to challenge the postwar international order over the Senkaku Islands by coercion and intimidation."

This response to China's attempt "to change the status quo by coercion" has been the main pillar of the Japanese government's claims in the "propaganda war." If China continues its provocative behaviour against Japan, and even if it took over the Senkaku Islands by military force, Japan can keep making appeals to the world that Japan is justified in claiming sovereignty over the islands. Prime Minister Shinzo Abe has also been advocating the stance as a leader during his visits to other countries, for instance.

During summit talks between Abe and US President Barack Obama held in St. Petersburg on Sept. 5, Obama made clear that he would oppose to any effort to resolve the Senkaku issue through coercion, showing understanding of Japan's position.

Explaining Obama's remark, a senior Foreign Ministry official said, "It was a statement of only 10 seconds or so during an hourlong meeting, but it was a great one."

Which country is challenging the international order after World War II? China? Or Japan?

The "propaganda war" will have a significant impact on the direction of the Senkaku Islands issue, as members of the international community must show understanding despite the opposing viewpoints of two countries.