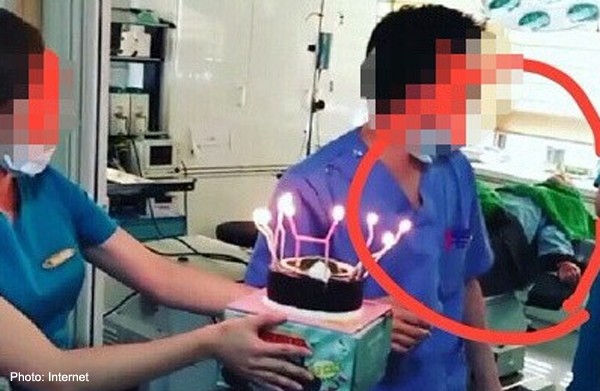 In one selfie, posted on photo-sharing app Instagram, staff in scrubs stand around a candlelit birthday cake - with an apparently unconscious patient lying on a bed behind them.

Another picture showed a staffer, wearing a mask and a surgery gown, jokingly placing a gel breast implant over her chest in an operating room. Another showed staff posing while eating hamburgers.

"Our officials are investigating the clinic to see if there was any violation of medical laws," said a spokeswoman from a public health department in Seoul's Gangnam district.

"They may look into whether such behaviour damaged the reputation of medical practitioners," she told AFP.

Under South Korea's medical law, behaviour deemed to tarnish the reputation of the industry can result in suspension.

The images, posted by one staffer, drew a storm of online criticism for alleged disregard of sanitation rules and patient safety. They were taken down later.

The clinic apologised Monday for "careless actions" by some of its staff, whom it confirmed were doctors or assistants there.

"We are left devastated for causing such concerns among our clients...because of the senseless behaviour," Jewelry Plastic Surgery Centre said on its website.

"We offer our deep apology... and will conduct thorough safety training for all our staff members." The upmarket district in southern Seoul - made famous by South Korean singer Psy's global hit "Gangnam Style" - is home to high-end stores as well as hundreds of plastic surgery clinics.