Seven stations, including one which had its service centre burned down, remained closed on Wednesday morning as Hong Kong's rail operator struggled to repair the damage wrought by violent mobs of protesters over the long weekend.

The MTR Corporation could not say on Tuesday night when the worst affected stations were likely to reopen, as it scrambled to return services to normal after hard-core protesters went on the rampage from Friday in response to the government's anti-mask law.

The embattled rail giant announced the whole system would close early again at 8pm on Wednesday to allow for repairs, as passengers entered the sixth straight day of MTR disruption. It was still to be decided what would happen to the Airport Express after 8pm.

Among the hardest hit were Mong Kok and Kwun Tong stations, the latter of which had its service centre completely burned down.

A Post reporter on Tuesday visited the Mong Kok and Kwun Tong hubs, which had been severely damaged after protesters set fire at the station entrances and a customer service centre, smashing glass everywhere and damaging fire sprinklers, leading to serious flooding.

The extensive vandalism at these two, and many other, MTR stations on Saturday caused the city's rail system to be completely shut down for the first time in its 40-year history.

At both Kwun Tong and Mong Kok stations, almost all the panels suffered damaged, including those for advertisements and railings, while many turnstiles and Octopus machines were smashed.

Some Octopus censors on the turnstiles were covered with thickened plastic. One entrance of Mong Kok station was also burned down, with its glass panels completely destroyed.

The other closed stations, as of Wednesday morning, were Tseung Kwan O, Hang Hau, Che Kung Temple, Sha Tin Wai and Shek Mun. There are 94 stations on the MTR's urban network. 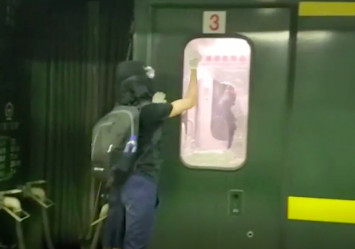 The MTR Corp said, as of Monday, some 1,200 turnstiles, about 800 ticketing machines and add-value machines, as well as roughly 900 CCTV cameras, 40 elevators and 70 roller shutters, had been maliciously damaged since the protests broke out in June.

It said the number of damaged facilities had increased significantly since Friday morning.

An MTR Corp statement on Wednesday said: "The MTR train service is running normally today, however, due to serious vandalism, some stations will not be opened for service, damaged facilities and station entrances/exits in other stations need time to repair."

The attacks came as Chief Executive Carrie Lam Cheng Yuet-ngor on Friday issued a ban on wearing face masks at public assemblies by invoking a colonial-era emergency law that had not been used in more than half a century.

Protesters reacted with violence, strongly denouncing and defying the mask ban as they unleashed destruction and chaos across Hong Kong over the past few days.

In an email to staff on Tuesday, MTR Corp's CEO Jacob Kam Chak-pui said Friday was the most devastating day in the history of the railway. 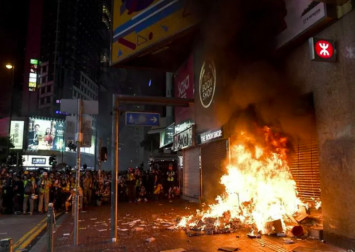 "We absolutely condemn these vicious and violent acts and the assailants should be brought to justice," he said.

He explained the destruction was so extensive that the rail giant had no choice but to suspend the services of the entire network on Saturday and offered limited services the following days.

"Mindful of our mission to keep Hong Kong moving, this is an extremely difficult decision, but we know we had to do it for the safety of both staff and passengers," he said.

He also said they realised that some security information had been leaked by the staff, putting other staff and passengers' safety at risk.

"While we appreciate colleagues have different views over the measures taken by the corporation, we should not compromise safety, especially that of our colleagues and passengers," he urged.

He also praised the frontline and maintenance staff for their dedicated service.

"I fully appreciate that dealing with such long and drawn-out protests is most physically and emotionally draining, and sometimes even frightening, but please be assured that the whole corporation is behind you. With all of us working together, I have faith that we will emerge as a stronger team," he said.

Hong Kong has been in the grip of escalating violence and bitter division since the anti-government movement erupted in June, sparked by the now-withdrawn extradition bill.