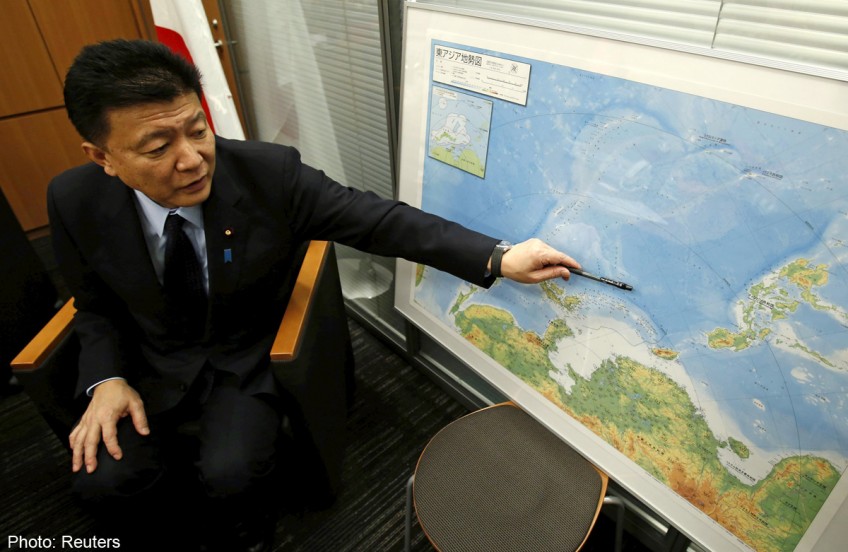 Yoshitaka Shindo, grandson of Tadamichi Kuribayashi, commander of the Japanese troops who fought and died in the battle of Iwo Jima, speaks during an interview in Tokyo

TOKYO - When Yoshitaka Shindo was a boy, he did not hear much from his family about his grandfather Tadamichi Kuribayashi, commander of the Japanese troops who fought and died in the bloody battle of Iwo Jima.

The battle, in which nearly 7,000 US Marines and almost 22,000 Japanese defenders died, was etched in America's memory by an Associated Press photo of six soldiers raising the U.S flag on the small volcanic island's Mount Suribachi.

For many in Japan, however, it was long a tragic defeat best forgotten.

"Human beings don't want to talk about what is most painful," Shindo, a conservative ruling party lawmaker and former member of Prime Minister Shinzo Abe's cabinet, told Reuters in an interview.

"As a child, I was told that my grandfather worked diligently for the sake of the country and that he was a very gentle person. But as for details such as what happened when, neither my grandmother or mother really spoke about that."

Japanese Defence Minister Gen Nakatani and Health Minister Yasuhisa Shiozaki will attend a memorial service with US representatives on Saturday to mark the 70th anniversary of the epic 36-day battle.

More ordinary Japanese are now aware of the battle, in which just 1,083 Japanese defenders escaped death, in part because of Clint Eastwood's 2006 film "Letters from Iwo Jima", inspired by letters from Kuribayashi to his family on the eve of the battle.

But the years of silence have left a gap that makes it harder to pass on wartime experiences to younger Japanese.

"My grandfather didn't really like to speak about the war. At night, he would moan in his sleep. He would scream sometimes and I assumed it was because of the war," said Atsushi Hirano, 22, who has travelled to 11 battlefields including Iwo Jima, as a member of a group that collects the bones of fallen soldiers.

"But I always thought I couldn't ask about it and then he died six years ago. I wish I had asked him more," said Hirano, a college student studying to become a teacher.

The tiny tear-shaped island of Iwo Jima, 700 miles (1,000 km) south of Tokyo, was the first scrap of Japan's native soil to be invaded in World War Two. America wanted it as a base for fighters escorting B-29 bombers headed for the Japanese mainland.

Kuribayashi, who studied at Harvard and served as a military attache in the United States, had little hope of victory at a time when many Japanese leaders knew the war had been lost.

"The battle looms and except when I am tired and sleep, all I think of is the fierce fight, an honourable death, and what will happen to you and the children after that," wrote the father of three.

But aiming to inflict as much damage as possible on the US forces, Kurbayashi honeycombed the island with tunnels from which defenders could only be dislodged at great cost.

Shindo said his grandfather was believed to have been struck down by a bullet after he removed his officer's insignia and joined his troops in an attack on US forces.

Kuribayashi's bones have never been recovered - nor have the remains of more than half of the Japanese soldiers who died.

"They hid themselves on that fortress of an island and fought on alone to prolong the battle," Shindo said. "They think they are still fighting, so I want to bring them home as soon as possible."