Shanghai copes with trauma after stampede 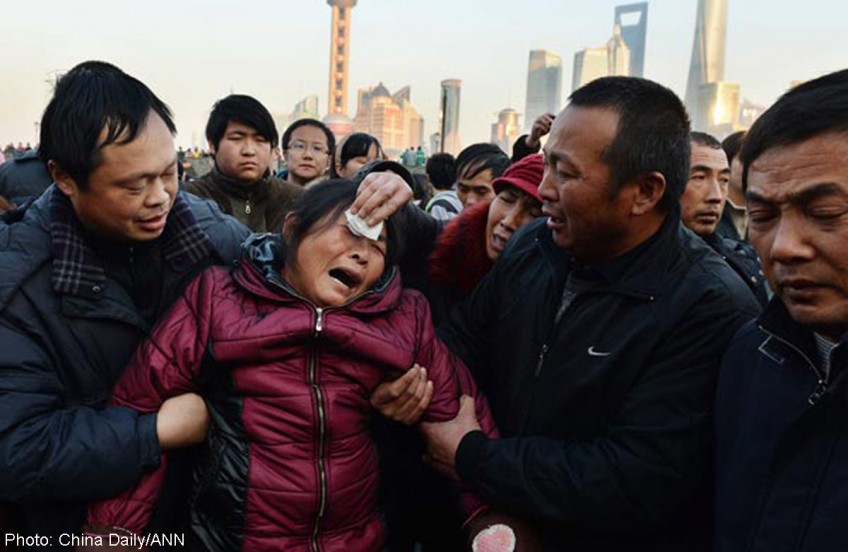 Twenty-nine people remained hospitalized on Friday after a stampede at the Bund, a well-known tourist site in Shanghai, that killed 36 others on New Year's Eve.

Two of those being treated were admitted on Thursday afternoon, the day after the tragedy. Twenty people have been discharged, municipal health authorities said.

But 10 people are seriously injured, four of them in critical condition.

Relatives or co-workers of 28 of those hospitalized have been contacted, said Wu Jinglei, a spokesman for the Shanghai Health and Family Planning Commission.

A team of 40 mental health workers, including eight psychologists, and many volunteers were organised to help the injured and their families to cope with the situation.

The identities of 35 people who died have been released. Most were young women and college students not yet 30 years old, and the youngest victim was 12.

Police have not said what caused the tragedy, but they dismissed speculation it was triggered by people throwing coupons resembling US bank notes to revelers from a nearby building.

The investigation and surveillance cameras show that the coupons were thrown from a bar at Bund 18, about 60 meters from the stampede, and that it was after the tragedy, Shanghai police said.

The city has suspended permits for almost all large-scale activities.

On Friday, more pictures and video clips of the stampede were posted online.

In one clip, several young people standing on the elevated viewing platform near Chen Yi Square shout "step back" toward the tightly packed crowd.

"I was with three friends on the viewing platform," said a young man identified by xinmin.com.cn as Xiaojun. They saw people fall on the lowest step of the staircase and joined others shouting to the crowd not to step forward.

Xiaojun said that after the stampede, people held hands to form a pathway through the crowd so the injured could be evacuated.

Yu Hai, a Fudan University sociology professor, said on Friday that the stampede will not tarnish Shanghai's image.

"It was a very unusual accident at a specific time and place, and it is not related to our everyday life," he said.

The tragedy will certainly push the authorities to improve crowd management and precautionary measures at public spaces, he said.

On Thursday and Friday, the Bund continued to draw huge crowds of visitors, as police enhanced security.

Iron fences have been placed around benches on the viewing platform to discourage tourists from standing on and falling off them.

Simon Desmarais, a Canadian who was visiting Shanghai on a transit visa, said the Bund is a favourite site that no foreign tourist should miss.

"I was expecting more people to be here," said Desmarais, who was taking pictures with a friend of the Pearl Tower and other landmark buildings on the other side of the Huangpu River.

"In Canada, it's impossible to have a stampede like this," he said. "We don't have very big crowds in Canada, not too many people."

Desmarais said he thought of Shanghai as a safe city, that China is generally safe, and that the tragedy shocked him.

[[nid:163973]]
SUBSCRIBE TO OUR NEWSLETTER
Your daily good stuff - AsiaOne stories delivered straight to your inbox