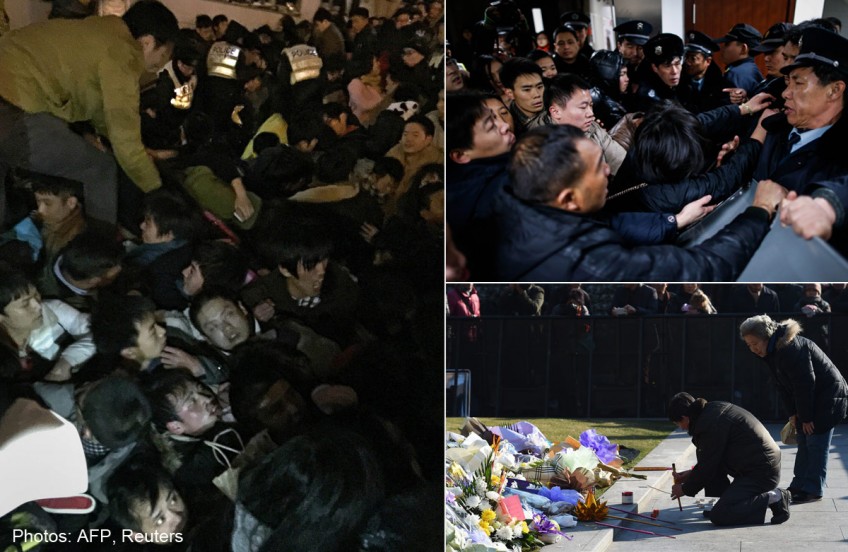 SHANGHAI - Dozens of deaths from a crush in Shanghai highlight China's enduring vulnerabilities even as the country races ahead economically, commentators say, with authorities' management outpaced by new buildings and advanced transport.

A New Year's Eve celebration on Shanghai's signature waterfront Bund turned deadly, killing 36 people, most of them young women, in a city that hosted the World Expo in 2010 and where the stock market went up more than 50 per cent last year.

Shanghai has been at the forefront of China's decades of rapid development and now boasts the world's second-tallest building and its first commercially operated magnetic levitation - or maglev - train, part of the biggest high-speed rail network on earth.

It is the location of China's first free trade zone and has stated intentions of becoming an "international city" and a global centre for finance, trade and shipping, echoing its history before the Communists took power in 1949.

But despite those major achievements and tall ambitions, residents question how police nevertheless failed to control the crowds that led to the New Year crush, which also injured 49.

Chinese police are not accustomed to handling spontaneous large groups in a country where the Communist authorities normally keep strict control of major gatherings.

A comment by a police officer that fewer personnel were dispatched to the Bund for New Year than China's National Day celebration last year has stoked the controversy.

"I believe this is a major case of negligence by government safety agencies," said a microblog poster using the handle Shenshan Laohan 96886.

"Because they made this wrong judgement call, didn't take measures at the scene, it led to the tragedy." Police have said through state media that a more-than-normal 700 officers in the area responded quickly to the incident, despite witnesses saying emergency vehicles had trouble gaining access due to the crowds.

In an unusually critical commentary, China's own official news agency Xinhua said the Shanghai stampede was a "wake-up call" over the push for economic growth at the expense of people.

"The world's second-largest economy is still a developing country which has fragile social management," it said.

'No stranger to incidents'

"Similar incidents causing heavy casualties are rare in developed countries," it added, citing mine disasters and industrial accidents as other symbols of the hazards of rapid growth.

But while China was "working on achieving its dream of rejuvenation", Xinhua said, it was "no stranger to such incidents".

The country's coal mines are among the world's most dangerous, while factory accidents often occur as owners evade regulations or bribe officials to ignore safety violations.

"Improving people's lives should become a yardstick against which national development is measured," Xinhua said. "There is no development worth people's lives." The Shanghai crush was centred on a wide stairway linking a raised riverfront promenade with a plaza below, part of a major urban reconstruction project in the 1990s that transformed the Bund, which began as a muddy towpath in the 19th century.

The changes expanded the area, moved traffic underground and created a tourist attraction.

Peter Hibbard, author of the history "The Bund Shanghai: China Faces West", praised the creation of the public space and said it had "caught people's imagination as a place to go".

But he added: "The Bund never had the capability of accommodating so many people before." The Bund is now packed with high-end restaurants and expensive boutiques, and Shanghai residents have traditionally flocked there to celebrate New Year, with nearly 300,000 packing the area last New Year's Eve.

More recently, the district government has staged official celebrations, and this year's "countdown" included a light show, performances and fireworks.

But the crush highlighted a mismatch between the city's growth and its public services.

Shanghai's official population is 24 million, but the number of unregistered migrant workers - who, despite being encouraged to move to cities are shut out of social services such as healthcare and education - boost the total.

"There's a management issue," said Andy Xie, an independent economist and a Shanghai native. "There are social issues about all of these people flocking to the city." "It's not easy to manage Shanghai... There's nothing like this elsewhere in the world."

[[nid:163973]]
SUBSCRIBE TO OUR NEWSLETTER
Your daily good stuff - AsiaOne stories delivered straight to your inbox