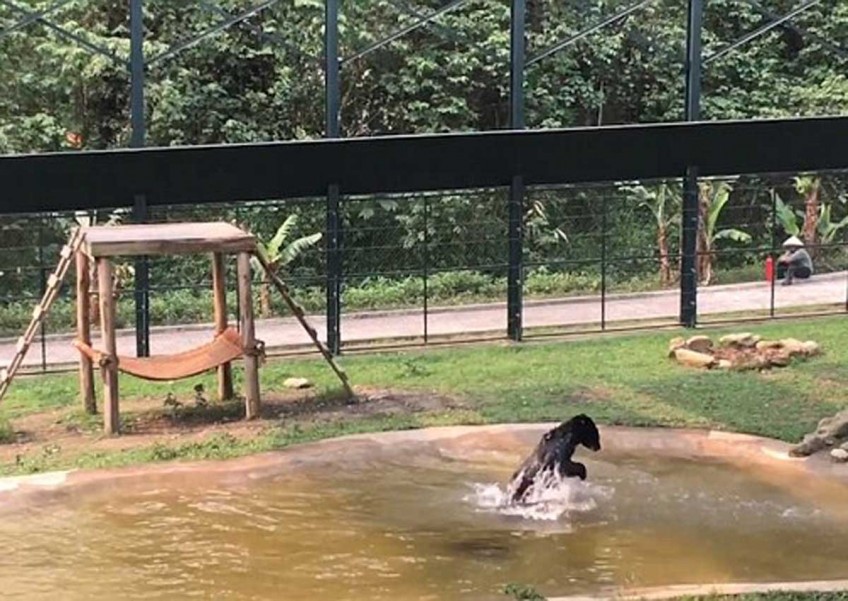 Bear that was rescued seven months ago from bear bile farm in Vietnam, now jumps for joy in its rescue centre's pool.
Video screengrab

A bear which was held captive in an animal farm was finally able to splash around in a rescue centre's pool after seven months of intensive care and treatment.

According to a video uploaded by Hong Kong group Animals Asia, a black bear by the name of Tuffy was taken to Animals Asia's Tam Dao rescue centre in Vietnam for rehabilitation in September last year.

Tuffy had been rescued from a bile farm where they had been extracting bile from him for years.

The bile was then sold as an ingredient to be used in traditional Chinese medicines.

During examination, the veterinary team found Tuffy's gall bladder in such a horrid state that they had to remove it altogether.

He was also found with a number of gallstones in his bladder - suggesting that he had been living in pain for several years.

On top of all that, Tuffy had fractured teeth and cracked paws as a result of being caged at the bile farm.

With his treatment complete, Tuffy is now able to fully explore his new surroundings at the rescue centre.

And as the video shows, he seems to love his new life so much that he wildly splashes and jumps around his pool.