A Singapore Airlines plane sits on the tarmac at the city state’s Changi Airport amid the pandemic.

Within weeks, businesspeople and officials will be able to travel between Singapore and six Chinese regions without having to serve lengthy quarantines – so long as they submit to coronavirus swab tests before departure and on arrival, stick to itineraries they have submitted to authorities and use the host country’s contact tracing app.

Travellers will also need to have a sponsor – either a company or the host country’s government – and gain approval from authorities for a “SafeTravel Pass”.

The arrangement, which encompasses Shanghai, Tianjin, Chongqing, Guangdong, Jiangsu and Zhejiang as well as the city state, was announced at the weekend, with authorities giving further details on Wednesday about how it will work.

Limits on the number of travellers allowed to move between the two countries will be imposed, although authorities have yet to announce any specific quotas.

Prospective travellers from China who are sponsored by Singapore government agencies will be able to apply for the SafeTravel Pass from Monday, with applications being opened to those sponsored by companies at a later stage.

At present, China and Singapore only allow those with residency to enter, and they have to serve a 14-day quarantine upon their arrival.

The new fast lane arrangement, however, will reduce these waiting times down to one or two days for the results of the traveller’s second Covid-19 swab test to be returned.

An initial negative swab test would have had to have been done within 48 hours of departure for travellers to be eligible for the scheme.

Travellers who test positive upon arrival in either country will undergo medical treatment in the host country and bear the treatment costs themselves, officials said on Wednesday, adding that the arrangement is expected to be gradually expanded to cover other Chinese provinces and municipalities.

Read Also
Worst-case scenarios of what air travel may be like post-Covid-19, and it's not just expensive fares 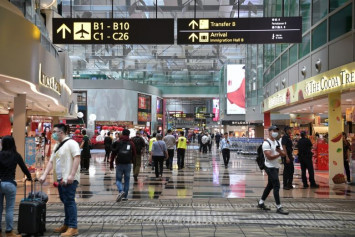 China already has a so-called green lane arrangement between 10 of its cities and South Korea, while Singapore is in talks with other countries regarding similar schemes.

Elsewhere, New Zealand and Australia have been in discussions to instigate a quarantine-free “travel bubble ” between the two countries.

Such travel bubbles are meant as a way to revive cross-border economic activities after the novel coronavirus pandemic upended global travel and sent country after country into lockdown earlier this year.

Singapore has barred tourists and business travellers from entering since March 24, with passengers not even allowed to transit Changi Airport until June 2.

China also stopped the entry of visitors, with airlines limited to maintaining just one route to China that flies only once a week.