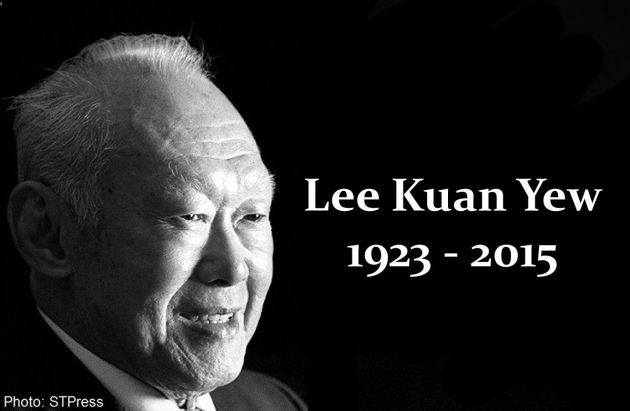 Lee Kuan Yew, former prime minister of Singapore, died on Monday at the age of 91, according to a statement released by the Prime Minister's Office.

"Mr Lee passed away peacefully at the Singapore General Hospital today at 3:18 am," the statement said.

Lee, a Cambridge-educated lawyer, is widely credited with building Singapore into one of the world's wealthiest nations on a per capita basis with a strong, pervasive role for the state and little patience for dissent.

He co-founded the People's Action Party (PAP), which has ruled Singapore since 1959 and led the newly born country when it was separated from Malaysia in 1965.

In Beijing's eyes, Lee Kuan Yew, the late founding father and leader of Singapore, was not only "an old friend of the Chinese people", but also "the founder of China-Singapore relations", according to China's previous official news releases about his visits.

Bilateral, top-level interactions were pioneered by Lee 14 years ahead of the establishment of the two nations' diplomatic relations in 1990.

Chinese media estimated that he had been to China more than 20 times, and he was known for his good personal relations with China's top figures, especially former leader Deng Xiaoping.

Zhang Jiuhuan, the Chinese ambassador to Singapore from 2000 to 2004, noted that "it was a rare case" at the time that a foreign prime minister would visit China, as Lee did in 1976, in the absence of diplomatic relations between the two nations. Deng then paid back the visit, going to Singapore in 1978, in what Zhang described as a sensational trip.

Lee was a man "with thoughts free from orthodoxy", and his pragmatism in diplomacy made Singapore a pioneer among Southeast Asia nations in harvesting large-scale trade, economic co-operation and talent exchanges with China, Zhang said.

However, Lee's intimacy with China since 1976 goes way beyond his remarkable record of handshakes with most of China's top leaders, including Mao Zedong and Deng.

Those who witnessed history unfold, as well as other observers, hailed the Singaporean statesman's efforts in inspiring China's reforms and opening-up.

Jin Canrong, a professor of international relations at Renmin University of China in Beijing, noted that Lee's No 1 contribution to China was his efforts in "sharing Singapore's successful experience in governance", adding that "China has benefited a lot" from this.

The China-Singapore Suzhou Industrial Park, inaugurated in February 1994 in Jiangsu province in East China, was proposed by Lee, who even went to the city in 1992 to inspect the site for the park.

Now, with the park serving as a role model for China's economic co-operation with foreign countries, more such industrial parks hosted or co-hosted by China have been established domestically and abroad.

Additionally, because of Lee's advocacy for sharing his country's inspiring philosophy of governance with China, Singapore has served as a de facto, inspirational training centre for visiting Chinese officials.

In 2011, Xi Jinping, then China's vice-president, told Lee that "tens of thousands of Chinese officials at various ranks have been to Singapore for visiting and studying", and "this has played an important role in promoting bilateral relations and China's construction for modernization".

Even during his last few China visits, Lee often expounded when meeting with Chinese leaders on nurturing talent and the need for further promoting people-to-people exchanges.

Jin, the Renmin University professor, recalled his encounter with Lee in 2007 at a symposium in Singapore, in which Lee displayed his admiration for Deng Xiaoping.

"Lee was asked by a visiting scholar from China for advice on China's future reform and opening-up," said Jin. "Lee said, 'You have Mr. Deng Xiaoping already. He is way better than me. Just follow him!'"

In addition to his identity as a frequent visitor to China and guest of Beijing, he was internationally known as an insightful observer of China-related affairs who was often sought out for advice.

His books, articles and comments on China's evolving role in regional and global contexts - either positive or negative, in the eyes of ordinary readers - often put him in the media spotlight.

Some observers have regarded him as a bridge that connected China and the rest of the world, while others described him as a mirror that reflected "how China looks in the eyes of the region and other parts of the world".

"Generally, China pays respect to him," professor Jin said. "The two sides may differ in some issues, because Singapore is another country, after all. ... It was perfectly natural for Lee to act out of national interests and deliver some differing opinions."

Zhang, the veteran diplomat, said Lee was a man known for his "nonstop pursuit of new knowledge". Lee always learned new skills and kept pace with the changing world, including his Internet interactions with ordinary people and his fluency in the Chinese language, Zhang added.

"Why have people always paid great attention to his insights and referred to him for advice on hot spot issues around the world? Because he often saw what people could not see," the former ambassador said.

Lee Kuan Yew, Singapore's former Prime Minister, is one of the few world leaders who have met with China's five top leaders. Lee has visited China as many as 33 times since his first visit in 1976.

Lee is acclaimed as the "founder of close Sino-Singapore relations" by present Prime Minister Lee Hsien Loong, who is also Lee's oldest son.

1978 Deng Xiaoping visited Singapore and had a meeting with Lee

1988 Deng Xiaoping met with Lee during Lee's visit in Beijing

2010 Xi Jinping visited Singapore and had a meeting with Lee

In a book published in 2013, the Asian statesman said he feels weaker by the day and wants a quick death.

The longtime fitness buff has visibly slowed since his wife of 63 years Kwa Geok Choo died in 2010.

The Prime Minister's Office (PMO) first announced Lee Kuan Yew was in hospital because of sever pneumonia in a statement on Feb. 21, and updated on Feb. 26 saying that he was still warded.

A statement on Feb. 28 said Lee's condition had improved slightly, and he was continuing with his antibiotics. The statement noted he remained sedated and on mechanical ventilation at the intensive care unit in Singapore General Hospital.

The PMO released statements on March 6 and on March 13 respectively, saying Lee Kuan Yew's condition remained largely unchanged, and he continued to be watched closely by his doctors.

Lee's condition worsened due to an infection and remained critially ill in the ICU, said the PMO on March 18.

Lee has been credited with transforming the city-state from a sleepy tropical port to a wealthy, bustling financial hub with one of the highest incomes in the world.

His ancestral home is at Dabu county, Meizhou city, Guangdong province. He once attended Raffles Institution. His education was disrupted by World War II, but went on to study in England after the war. He briefly attended the London School of Economics before moving to the University of Cambridge, where he read law at Fitzwilliam College and graduated with a rare Double Starred (double First Class Honors).

A founding member of the ruling People's Action Party (PAP), Lee became prime minister in 1959 when Britain was gradually handing over colonial power to the new local administration. Singapore joined Malaysia in a federation in 1963, but the two split two years later.

The PAP has returned to power in every election since 1959 and currently holds 80 of the 87 seats in parliament.

He stepped down as prime minister in 1990 in favour of his deputy Goh Chok Tong. Goh in turn handed the reins to Lee Hsien Loong in 2004.

Even after Lee retired, he continued to work for the government, first as "senior minister," a non-executive advisory post created for him, and from 2004 until 2011 as "minister mentor".

He is still an MP for the port district of Tanjong Pagar but retired from advisory roles in government in 2011.

Lee Kuan Yew, as the founding father of Singapore, left abundant political legacies behind, from which this Southeastern Asian country is still benefit.

Attaching much importance to legislation

One of the major ruling concepts promoted by Leeis legislation, to which he attached much importance. He believed that legislation provides the basic framework for social stability and development.

He thought that law needs to demonstrate humanity and respect people's rights, however law also should limit abuse of power, which will lead to the falling apart of the social order. One of Lee's abiding beliefs has been in the efficacy of corporal punishment in the form of caning.

Lee encouraged innovation and opening to the outside world. He said that the quality of a nation's manpower resources is the single most important factor determining national competitiveness. It is the people's innovativeness, entrepreneurship, team work, and their work ethic that gives them that sharp keen edge in competitiveness.

Under his ruling, the implementation of internationalized economic polices has made Singapore one of the most important manufacturing bases of export and import.

He promoted development of infrastructure and forged Singapore into an oasis of development. Singapore also makes full use of the advantages of being a port of reshipment and provides international and authorised financial service.

Lee set English as Singapore's first official language and Chinese as the second to let people form an English thought pattern. He emphasizes the importance of knowledge in economic transformation but also rejects the classical separation between scholarship and entrepreneurship.

"Those with good minds to be scholars should also be inventors, innovators, venture capitalists, and entrepreneurs; they must bring new products and services to the market to enrich the lives of people everywhere," he said.

Singapore is a small country in both area and population, but it has a unique influence on Asia and even the world, which owes much to its founding father and first prime minister Lee Kuan Yew.

To set foot firmly in the world, Singapore needs to be strong enough. As a tiny country, Singapore cannot compete with big countries in natural resources or military power. So economy is the best way out.

Lee warned the government and the people that they should always have a strong sense of urgency.

Under his leadership, Singapore witnessed the rapid rise and became an economic power in just one generation.

Singapore became an independent country at a time when the cold war was like a raging fire. How to survive among the big powers became a problem for Lee.

Lee is famous for pursuing balanced diplomacy. He once said that if there are two competing big powers in a region, then there is space for small countries to switch sides. He implemented the idea of nonalignment.

Singapore maintains friendly relations with the United States, but does not have formal allies.

He adopted the policy of neutrality and did not easily choose sides. But when the time came, Singapore would have its own voice and make its position clear.