Singapore has overtaken Hong Kong in the latest ranking of the world's leading international financial centres as the latter city moves closer to ending its strict hotel quarantine rules for arrivals, one of several measures to control the Covid-19 pandemic that have weighed on the local economy.

Hong Kong ranked fourth in the 32nd edition of the semi-annual Global Financial Centres Index, produced by the China Development Institute in Shenzhen and the London think tank Z/Yen Partners.

New York was ranked as the top financial centre, followed by London and Singapore.

"The report pointed out that as compared to the assessment by financial industry practitioners from other major financial centres on the prospects of the cities in which they were based, practitioners based in Hong Kong were the most confident about the future competitiveness of Hong Kong as an international financial centre," a Hong Kong government spokesperson said.

"We will continue to listen to views and be bold in taking forward reforms to consolidate and strengthen Hong Kong's capital market and our role as an international financial centre."

Singapore jumped from sixth place to third in the latest ranking, whilst Hong Kong fell to fourth.

"Continuing travel restrictions in places like Hong Kong and Tokyo affect their ability to conduct normal levels of business," the report's authors said.

In August, Singapore moved to lift its indoor mask mandate, one of the last remaining pandemic restrictions as the city state moved forward with its policy of living with Covid-19.

Singapore also implemented new rules to make it easier for travellers who are not fully vaccinated to visit the city.

Shanghai was sixth in the study and Beijing eighth. Shenzhen jumped one place to ninth.

The ranking, released twice a year, in March and September, is based on a global online survey of 11,038 financial professionals, who evaluated 119 cities on 151 factors in five broad areas of competitiveness, including business environment, human capital and reputation.

Hong Kong has followed a "zero Covid" policy for more than two years since early in the pandemic, requiring visitors at times to spend as much as 21 days in a hotel or quarantine facility upon arrival.

Members of the business community have been increasingly critical of the city's policy as other financial centres have eased restrictions and generally returned to life as normal. 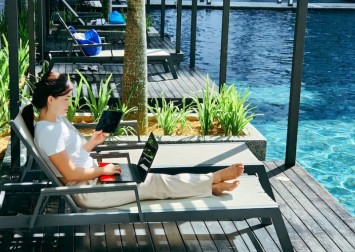 The city's Covid policies have been blamed for the cancellation of the Standard Chartered Hong Kong Marathon, set for November of this year, and next year's World Dragon Boat Racing Championship being moved to Thailand.

City officials are hoping to attract global banking leaders for a two-day summit being hosted by the Hong Kong Monetary Authority (HKMA), the city's de facto central bank, in November, as an endorsement of the city's role as a global financial centre.

Chief Executive John Lee Ka-chiu promised to create "maximum room" for the city to reconnect with the world at a press conference this week, but stressed the importance of an "orderly" approach to easing travel rules to avoid rolling back on Covid-19 policies.

In August, the city's government revised downward its growth forecast for the economy to -0.5 per cent to 0.5 per cent, citing the worse-than-expected economic performance in the first half and the sharp deterioration of global economic prospects.