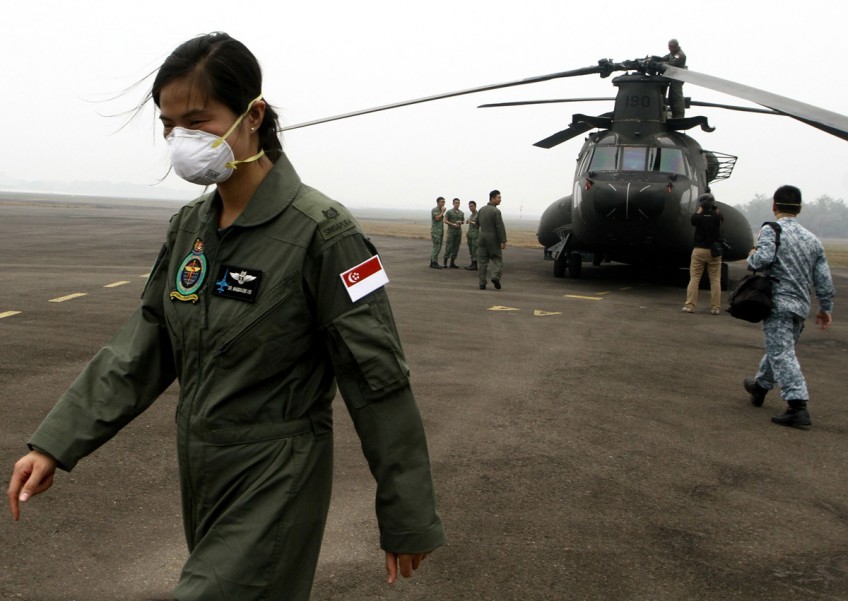 A Singaporean Chinook helicopter arrives at the Talang Betutu air force base in Palembang, in Indonesia's South Sumatra province, on Oct 10, 2015 as part of their efforts to help Indonesia combat forest fires causing a choking haze that has engulfed the region.
AFP

He said the team has performed 47 water-bombing operations and put out about 35 hot spots in Palembang, which is the capital of South Sumatra.

He described the efforts of the contingent, consisting of 40 Singapore Armed Forces (SAF) and Singapore Civil Defence Force (SCDF) troops, including a full-time national serviceman who had volunteered for the mission, as a team effort, and said it had done well.

"They know the task is difficult and that it is hard to put out fires without the help of rain. But the SAF's presence as part of a multinational effort does send a strong signal that there is international attention and support as Indonesia seeks to address the problem of transboundary haze which has affected many neighbouring countries," Dr Ng wrote.

"Well done and keep it up," he added.

On Oct 10, the SAF deployed a 34-strong team to Indonesia. It was accompanied by a six-man Disaster Assistance and Rescue Team from the Singapore Civil Defence Force (SCDF).

The Republic of Singapore Air Force (RSAF) aircraft involved in the mission include a CH-47D Chinook helicopter, which can haul a 5,000-litre heli-bucket, and two C-130 transport planes to ferry the SAF and SCDF personnel and their equipment to the area of operations.

In his post, Dr Ng added that Singapore will continue to work with its Indonesian counterparts as required to tackle the haze situation in Palembang.

A media advisory by the National Environment Agency (NEA) said that more than 350 hotspots were detected in Sumatra on Monday.

"The moderate to dense smoke haze is still persisting in parts of central and southern Sumatra, and some haze from Kalimantan is also observed to have spread to the sea areas southeast of Singapore," the NEA update said.

For more updates, visit the the haze microsite at www.haze.gov.sg.