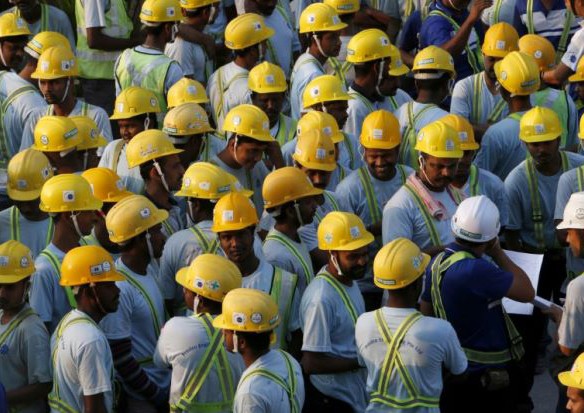 SINGAPORE/DHAKA - Mohammad Ashadul Islam placed all his hopes for a better life for his family in Bangladesh on getting a construction job in Singapore.

He sold his father's land and fish farm and also borrowed money from banks and relatives to pay S$17,000 in fees to multiple agencies who helped arrange the job and his trip to the island state early last year.

But in December, his employer told him that there wasn't enough work and he was laid off from a job doing a range of tasks, such as directing traffic around building sites, and operating excavators. Islam was given a month by Singapore's Ministry of Manpower to find another job but, unable to do so, he returned home still owing $6,000. He had only earned $5,000 during his time away - based on basic pay of just $18 a day and overtime of $3 per hour.

For Singapore, a system of temporary labour to do many jobs in the construction, shipping, manufacturing and service industries - including hotels and restaurants - works as an effective buffer. When times are good it means Singapore can fill jobs that would otherwise be vacant but when the economy is weak and unemployment rises - as has been happening in the past year - it is easy to cut back on foreign workers.

However, for the workers it is a brutal system that can leave them in big debt and regretting they ever made the move to Singapore.

"I go back for what? No fish, no land. I go back or die, same-same," Islam said in an interview just before heading back to Bangladesh.

Singapore's Ministry of Manpower said the agency fees foreign workers incur in their home countries are beyond its jurisdiction. "We hope that source countries would do more to address the issue of high agency fees incurred, and we will refer cases to their embassies here for follow up where appropriate," it said in an emailed statement to Reuters.

Islam, 25, is among thousands of migrant workers, mainly from Bangladesh and India, who left Singapore's shipyards and building sites last year because of a 30 per cent contraction in the marine sector largely related to a drop in demand from the energy industry, and a downturn in construction. It was the first year since 2009 when the number of low-skilled jobs taken by foreigners fell here.

Reuters interviewed around two dozen Bangladeshi workers who were laid off recently in Singapore, and many of them provide similar pictures of growing hardship. Many face agency fees that cost between 26 and 51 months of their total basic wage in Singapore, and they leave the island with heavy debt burdens.

To be sure, many workers still in jobs say they are happy with their working conditions and are motivated by success stories of fellow countrymen who built homes and started businesses back home after working for a few years in Singapore.

While conditions are tough - many live 12 to a dorm room and work 12 hour days with only one day off a month - it is still often much better than the alternatives in Bangladesh.

The number of work permit holders in Singapore, excluding domestic workers, fell by 12,600 to 753,000 in 2016, with most of the losses in the construction and shipping industries, according to the Ministry of Manpower.

But two diplomats from countries that are a source for such workers say they are taking the brunt of the contraction.

Singapore does not disclose the breakdown of nationalities of its migrant workers, but the Bangladeshi High Commission's labour councillor Ayesha Shelly estimates its workers in Singapore decreased more than 30,000 last year to some 120,000.

"Every day my staff are in the airport sending workers back," said David Leong, managing director of Singapore-based recruiting agency PeopleWorldwide, adding that the number of workers he supplied to shipyards last year dropped 40 per cent.

This is likely to have an impact on Bangladesh's economy because remittances are the nation's second-biggest source of foreign income after garment exports. Bangladesh's remittances fell more than 11 per cent in 2016 to US$13.6 billion (S$18.9 billion), according to the nation's central bank, with much of the decline because of the impact of lower energy prices on Middle East employment.

Workers say there are not many established recruiting agencies for Bangladeshis, and many job seekers rely on a myriad of middlemen and brokers who share recruiting, training and transportation and then split fees, making it difficult to properly regulate the industry.

At least 98 recruiting agencies have been suspended over the past decade for alleged wrongdoings such as fraud and trafficking, according to a senior Bangladesh government official.

"People easily fall prey to recruiters who promise them higher paying jobs," said the official in the Ministry of Expatriates' Welfare and Overseas Employment.

A broker, who declined to disclose his name, said his company charges around 1 million taka (S$17,200) in fees but doesn't think they are charging too much, as the cost covers basic job training, language support and transportation.

And even those who have had one bad experience in Singapore seek ways to come back.

"My agent told me I would have to pay $5,000 to get back this (Singapore) job. How can I take that risk again? What if I lose the job after one year," asked Ataur Rahman, who was laid off last year and came back to Bangladesh with 300,000 taka of debt. He is now looking for a cheaper way back, he says.