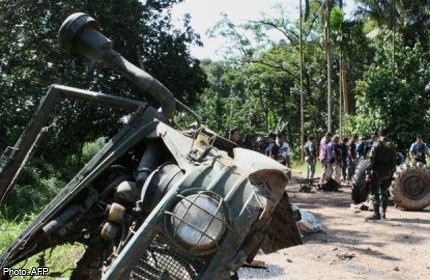 BANGKOK - Six people including two policemen were shot dead in a fierce gunbattle between Thai security forces and militants, authorities said Sunday, after a raid in the insurgency-plagued south of the country.

The clash broke out after a combined army, police and paramilitary group tried to search a village in Narathiwat, one of several conflict-prone provinces in the Muslim-majority region, on Saturday afternoon.

"It was quite a big gunbattle which lasted a long time," southern army spokesman Colonel Pramote Prom-In told AFP.

"The dead were on our wanted lists," he said, adding that a further seven suspects with warrants issued for them were also arrested in the raid.

Almost a decade of conflict has left more than 5,700 people dead in the Thai south.

Shadowy groups of Muslim militants, calling for autonomy for the region, have waged near-daily bomb and gun attacks, targeting security forces and civilians from both the Buddhist and Muslim communities.

The attacks continue despite several rounds of peace talks, hosted by Malaysia, between the Thai authorities and one of a network of rebel groups.

The next round of talks is expected later this month.