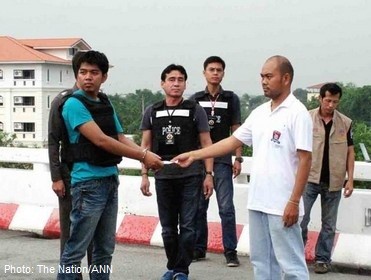 The lawyer said the suspect asked him to take care of his parents after he made changes to his confession, after initially claiming that he had killed his former boss on his own.

Suwat said he visited the suspect on July 26 at 1pm, a visit that was registered under the name of a female lawyer who spoke to the suspect an hour later.

The lawyer had previously said Santiparb had admitted to being paid Bt3 million by a group of people who wanted him to kill the tycoon, but he was later tasked with dumping the body after Akeyuth was killed by a "uniformed person" using "professional" techniques.

A source with the Bangkok Remand Prison, where the suspect has been detained for 72 days, said a team of lawyers had tried to visit Santiparb but their request was not granted.

The police yesterday submitted an investigation report on the murder to public prosecutors and did not say if they had accepted the result of a parallel report conducted by the National Human Rights Commission (NHRC).

"The NHRC report is considered useful and can be submitted to the prosecutors, who will later decide whether to look into it," Anuchai said.

He went on to say that if police investigators wasted time looking into matters that are not relevant to their investigation, they would miss the legal timeframe on closing the case.

The officer said further evidence from Suwat or other parties could be submitted to prosecutors any time within the 20-year statute of limitations for a murder.