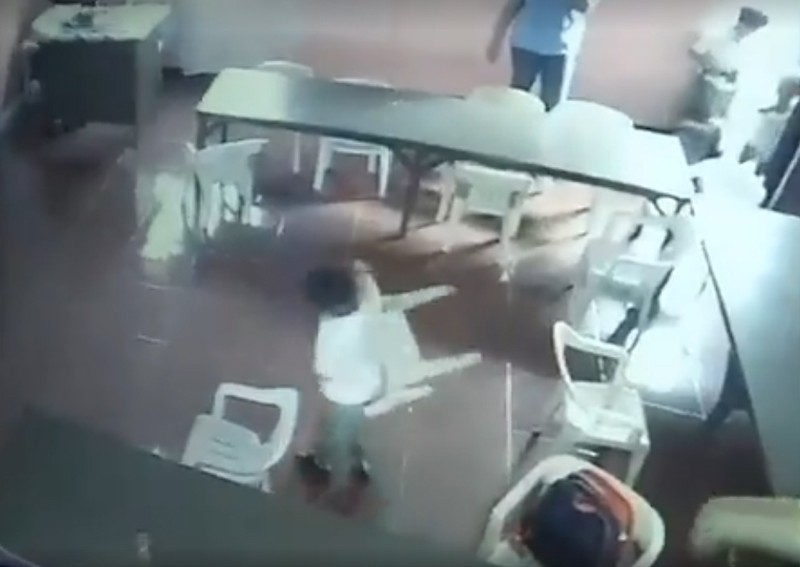 CAVITE - A four-year-old boy from Cavite province, 21km south of Manila, inadvertently elicited good-natured laughter and warmed the hearts of millions recently for something he did during and after class.

The young student, Dean Lewis Pagtakhan, went to class at a daycare centre in Kawit, Cavite on Aug 28.

In a video shared by his grandmother, Agnes Ravillo Orillos on Aug 30, Dean can be seen sleeping at his desk in the classroom while the rest of his classmates line up for dismissal.

As his classmates start leaving the classroom, a woman - the teacher's assistant - walks towards him to pack his things in his bag and wake him up.

He wakes up and groggily slings a plastic chair across his shoulders as he walks out of the classroom, thinking it is his bag.

"You made a lot of people laugh, kid. You went to school to sleep, then you took the chair for your bag," wrote Orillos in her post.

The video has since garnered over 11 million views and 200,000 shares. It was a scene that seemed to echo the sentiments of the millions of netizens who, at some point in their lives, found themselves in a similar situation after being abruptly awakened.

Orillos told inquirer.net on Thursday (Sept 6), that Dean apparently ate the food of his pregnant aunt before going to class that day.

"The child ate the food of his pregnant aunt. He was not sleepy at first when he went to school," she said.

Orillos attributed the boy's sleepiness to what he ate, which is intended for a pregnant woman.

"When the teacher asked them to do something, he was able to do it, but he was not able to finish because he fell asleep.

"Then came dismissal, during which he was still asleep. While the teacher's assistant was fixing his things, he got startled and mistook the chair for his bag," she said.

Orillos said that she did not expect her video would go viral.

"I was surprised. I lot of people found it hilarious, especially those we know in our province," she added.

As for the sleepy Dean, Orillos shared that he was delighted over the attention his funny video had received from people all over the country.