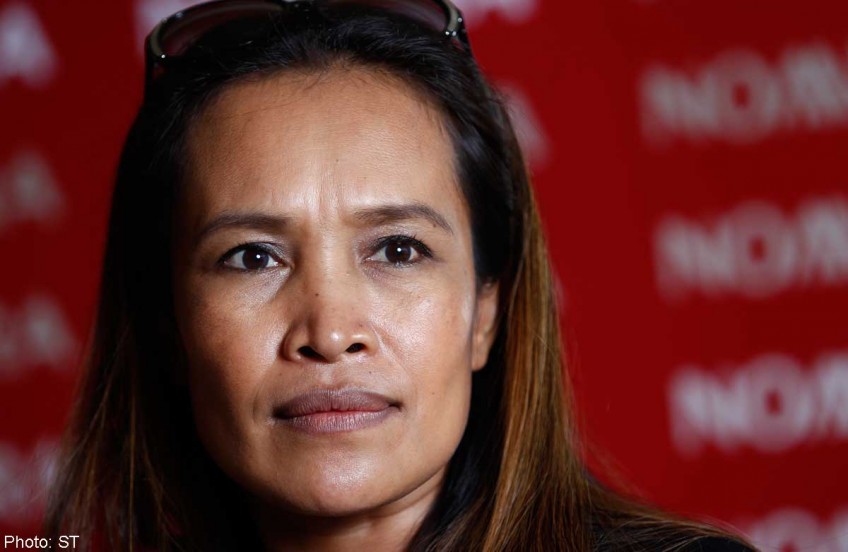 The unravelling of the story which Ms Somaly Mam (left) parlayed for celebrity status and brought in millions of dollars for her organisation is keeping donors on their toes. Meanwhile, Ms Mam has dropped out of sight of the media.

Once Cambodia's iconic crusader against sex trafficking, Ms Somaly Sam's exposure as someone who made up her story of victimhood has left the organisation she founded on its last legs now that United States funding has been cut off.

The shattering of the Somaly Mam myth and the apparent near-bankruptcy of her non-governmental organisation Afesip in Phnom Penh have sent tremors across other groups working in the field of anti-trafficking and also made donors more wary.

Still, it is unclear if lessons will be learnt, experts say.

Thirty-nine staff at Afesip - an acronym for its French name - have been laid off in the wake of a funding cut from the US-based Somaly Mam Foundation (SMF).

The non-governmental organisation (NGO) was active in the rescue of children allegedly being trafficked for sex, and received millions of dollars raised by the SMF in the US. But now, the future of more than 200 young women rescued and under Afesip's care is uncertain.

The SMF is trying to reinvent itself after Ms Mam's resignation in May, when the extent of her invented background as a trafficking victim - and the fact that she had made other young women tell invented stories of their own alleged trafficking ordeals - was exposed by Newsweek magazine.

"We will… be rebranding, renaming and relaunching our organisation," the SMF said in a statement posted on its website last month by executive director Gina Reiss-Wilchins. "In the coming weeks, we will present an expanded vision… bringing the organisation into greater alignment with our goal of eradicating trafficking and sexual exploitation in Cambodia."

In response to a request for an interview, SMF replied it had nothing further to share.

Ms Mam has dropped out of sight of the media. But she held a meeting with Afesip staff in late June where one option raised was the sale of assets to meet their salaries.

The unravelling of the story which Ms Mam parlayed for celebrity status in Hollywood and Manhattan and brought in millions of dollars for her organisation is keeping donors on their toes.

"They are more strict now, they are asking for much more paperwork," said Mr Kong Sokoeun, national coordinator in Cambodia for international agency Ecpat (End Child Prostitution, Abuse and Trafficking).

A donor in Singapore who supported Afesip wrote to The Sunday Times. "Somaly Mam has done irreparable damage to a worthy cause," said the donor, who asked to remain anonymous. "We just need to be more careful. I am sorry for Afesip but we won't be supporting this cause any more."

But experts say NGOs are often locked into a cycle of exaggerated claims in order to raise money.

"I hope this is a wake-up call," said Ms Karen Rasmussen, a child protection specialist based in the region. "There is tension between the marketing department and the programmes team in almost every NGO. I think a lot of marketing teams believe in a sound-bite culture, and donors feed into this. Donors say, just tell me what the problem is, and I'll sign the cheque.''

Dr David Feingold, an expert on the issue of human trafficking who has worked in the region for decades and also made documentary films on it, told The Sunday Times that the international community had "lost all perspective" over Somaly Mam.

"She made an assessment of what would get support for her project and the better the story the more support she got."

Ecpat International, a global NGO involved in fighting trafficking of children for sex, said in an e-mail that in a growing trend, as many as 1.8 million children around the world were involved in prostitution or other forms of commercial sex.

A single incident should not call into question the credibility of all NGOs, Ecpat said. But it added that "credibility and accountability issues should be an ongoing matter of importance".

Dr Feingold said that while due diligence should be sharpened, "it is not just finding out if they are running off with the money or their stories are not correct, but how effective are NGO programmes".

"A lot of the time, small NGOs are trying to do the right thing, but they don't have the expertise.''

Bid to repair damage "We will… be rebranding, renaming and relaunching our organisation. In the coming weeks, we will present an expanded vision… bringing the organisation into greater alignment with our goal of eradicating trafficking and sexual exploitation in Cambodia." SOMALY MAM FOUNDATION'S statement posted on its website by executive director Gina Reiss-Wilchins.

The Somaly Mam myth began fraying in 2012, when she had to apologise for misleading the United Nations in a complaint accusing the Cambodian military of killing eight rescued girls after it raided her shelter. But she could not produce any evidence to support the claim.

The same year, Phnom Penh-based Cambodia Daily exposed as untrue the stories of a sex trafficking victim apparently rescued by Ms Mam's non-governmental organisation Afesip. The woman, Ms Long Pross, said she was mutilated by a brothel owner after refusing to have sex with customers, and recounted her story in a French TV documentary and a PBS documentary, and also on Oprah Winfrey's TV show. Her story was fabricated, it was found.

Last year, more questions were raised when the testimony of another "victim", a girl called Meas Ratha, was found to have been made up.

The two testimonies in 1998 had helped to build Ms Mam's reputation.

In her bestselling 2005 autobiography, The Road Of Lost Innocence, Ms Mam claimed to have been sold into prostitution as a young teenager, who escaped and married a French aid worker and lived in France, then returned to Cambodia to help rescue young women from prostitution.

But in May this year, an investigative report by journalist Simon Marks in Newsweek magazine found that many aspects of Ms Mam's narrative had been embellished with lies, and the house of cards collapsed.

She resigned from her foundation and has dropped out of sight. Her charity Afesip is on the verge of closing down.