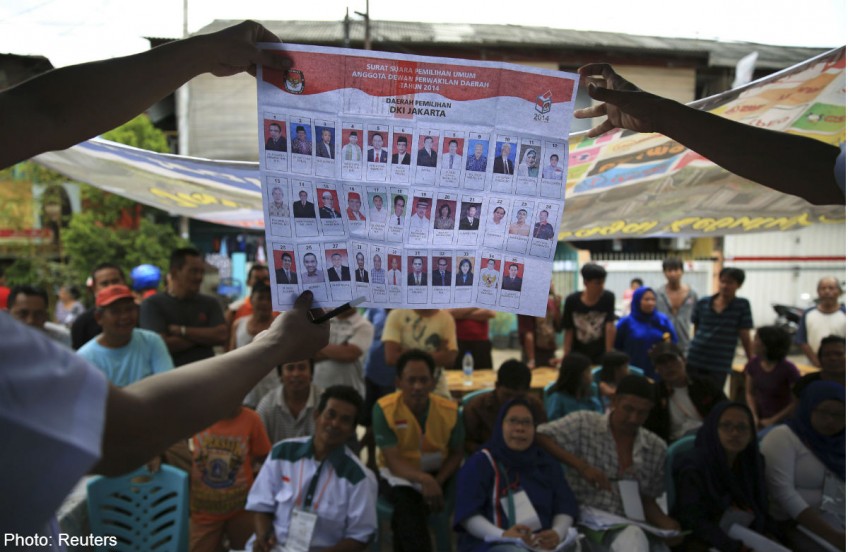 JAKARTA - A number of prominent politicians may lose their seats in the House of Representatives after early results based on quick counts conducted by a number of pollsters after the April 9 legislative election have indicated that they failed to obtain the minimum number of votes needed to secure a legislative seat.

Two notable lawmakers set to lose their seats are House Speaker Marzuki Alie and the outspoken Sutan Bhatoegana, both of the ruling Democratic Party, which fared poorly in the election.

"I'll return my focus to my business. I have nothing to lose," Sutan said on Sunday when asked about the prospect of losing his seat at the House.

Sutan said that foul play could have contributed to his poor showing in the legislative election.

"I have launched my own investigation. In fact, we have directly gone to my electoral district, North Sumatra I, and I should have secured the only seat my party got in the district," said Sutan, who has been implicated in the ongoing investigation into corruption at the Upstream Oil and Gas Regulatory Special Task Force (SKKMigas).

Also, Marzuki has conceded that he would not be returning to the House with the next batch of lawmakers.

"During the campaign, I focused on improving the Democratic Party's electability, not my own," Marzuki said.

Based on the quick count results, the Democratic Party garnered only 9.7 per cent of the vote, down from 20.8 per cent in 2009.

Meanwhile, Golkar Party lawmaker Poempida Hidayatulloh has resigned himself to defeat and he blamed the loss of his seat on rampant vote-buying.

"This year's legislative election was among the worst. Not only the rampant vote-buying, but I also received reports about poorly organised balloting in numerous polling booths. Officials at the local level were also proven to be incompetent, opening up chances for foul play and fraud," he said.

Poempida said he would focus on running his NGO, the People's Welfare Organisation (Orkestra), should he fail retain his seat.

Also expected to lose her seat in the House is Indonesian Democratic Party of Struggle (PDI-P) lawmaker Eva Kusuma Sundari, who is known for her stance on human rights and religious intolerance.

"I am ready to accept any result. My chances are indeed small. I suspect it was because of a 'pre-dawn raid'," she said, referring to a blitz of vote-buying that allegedly occurred on Election Day morning before voters went to the polls.

"In 2004, when elections still used the closed-list system, fraud had not been as bad as it was in 2014 when money played a huge factor," she said.

"Voters openly asked me for money but I opted to offer only forms of aid, such as basic clean water facilities and other things," Eva said. "But I can't understand why they favoured candidates who gave them Rp 50,000 (S$5.50) to Rp 100,000 early in the morning instead."

Jakarta-based pollster Saiful Mujani Research and Consulting (SMRC) recently released the results of its quick count, which was based on analysis of vote tallies in 2,000 sample polling stations, showing that numerous other prominent figures could fail to get seats in the House.

The results also showed that popular figures from the entertainment industry, who were expected to be big vote getters, would fail to win House seats.

[[nid:93748]]
SUBSCRIBE TO OUR NEWSLETTER
Your daily good stuff - AsiaOne stories delivered straight to your inbox