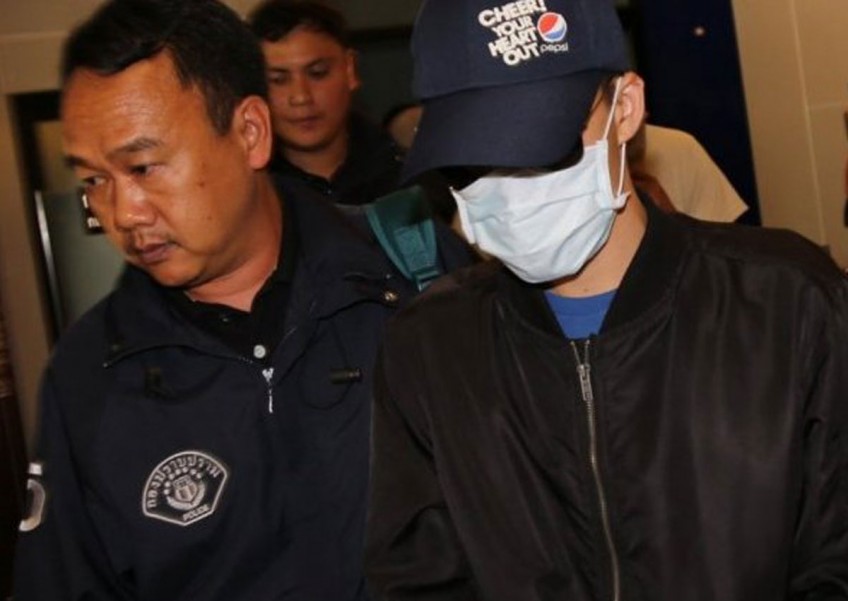 The son of a Kalasin police deputy superintendent has reportedly confessed to fatally stabbing Silpakorn University student Thirapong Thitatharn, 24, during an attack last month in the victim's dormitory room in Phetchaburi, a police source said yesterday.

The young man, whose name was withheld, was among 16 suspects - 14 men and two women - handed over by Cha-am police to the Crime Suppression Division (CSD), which is now handling the investigation.

Deputy national police chief Srivara Ransibrahmanakul said the suspects would face additional charges of racketeering, bringing the number of criminal charges against them to five - murder, attempted murder, home intrusion with use of a weapon, assault and racketeering.

Fifteen suspects were sent to the Ratchadapisek Criminal Court where the first 12-day detention order will be applied for, while one suspect who is a minor was sent to the Juvenile and Family Court.

Two other suspects remain at large while Srivara urged them to surrender or face arrest warrants.

Pol Maj-General Suthin Sapphuang, the CSD commander, said the investigation had identified three other individuals, including a relative of a politician, who were involved in the incident but had kept a distance from the scene of the crime.

In the evening, the Court rejected a bail request of a suspect who allegedly stabbed the victim while freed on bail the other suspects with conditions that they would neither threaten witnesses nor involve with evidence.

Earlier yesterday, outspoken lawyer Songkran Achariyasap submitted evidence that allowed Srivara to file the additional charge of racketeering against the 16 suspects, two of whom are under 18.

Songkran chairs a network that monitors activity deemed detrimental to the nation, religion and the monarchy. He said the husband of a female suspect told him via a Facebook message that the female suspect was about to testify, but was allegedly stopped by one of the suspects' parents, who ordered her not to speak to investigators.

The lawyer claimed the woman also told her husband in detail about what happened, which he relayed to Songkran.

Thirapong's family objected to the suspects being granted bail because of fear that they could tamper with evidence and threaten witnesses, Songkran said.

Thirapong's friends have applied for the Justice Ministry's witness protection programme, after they were reportedly followed by a "suspicious" car.

Songkran said Thirapong's mother, Areerat Chomlok, was relieved when the Forensic Police Institute's autopsy report was in line with a previous report by Ratchaburi Hospital. They said that Thirapong died from bleeding in the brain after he was stabbed by a screwdriver.

She said she would cremate her son's body after a 100-day merit making.

Thirapong was sleeping in his dorm with two roommates when as many as 20 assailants barged into their room and assaulted them on February 25.

Thirapong was beaten and stabbed in the head with a screwdriver. He died in Ratchaburi Hospital on March 2. His two roommates were injured in the attack.