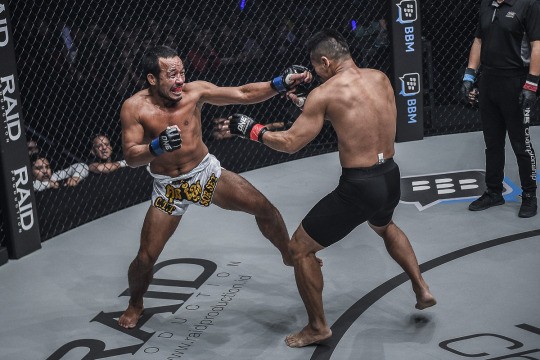 Unbeaten Indonesian star Victorio “Indra” Senduk expected to electrify the local crowd at the Jakarta Convention Center with another fantastic performance at ONE: GRIT AND GLORY, and leave the arena with his seventh professional win.

That did not happen, however. Cambodia’s Sor Sey spoiled his homecoming, and gave him the first loss of his career.

After a brief feeling-out period in the opening moments of round one, Senduk, a IBC Featherweight Champion, opened up his offense, and peppered Sey with pinpoint accurate combinations.

“Indra” connected often with his stinging side kicks, and engaged in the clinch, where he landed a series of knees to Sey’s midsection. But the Cambodian, with a wide grin on his face, continued to push forward despite Senduk’s well-rounded offense.

Round two quickly transformed into an all-out war, as both men unloaded their heaviest strikes in a thrilling back and forth battle at the center of the cage. More importantly, Sey finally got his rhythm down, and began connecting with his strikes. The Indonesian, on the other hand, began to tire.

By the end of the second frame, it was clear that Senduk was rapidly fading, as the momentum shifted into Sey’s favor.

With the bout on the line, the two surged forward in the third and final round, and it was anyone’s match. Senduk, who tried desperately to find his second wind, would once again end up on the receiving end of Sey’s thunderous strikes, including a monstrous straight right hand and right elbow combination that had “Indra” reeling.

After sweeping the Indonesian with a low kick, Sey followed him to the mat, advanced to full mount, and finished the bout with relentless ground and pound.

That left a lasting impression on the judges, who gave the Cambodian the win via unanimous decision. Sey elevates his record to 4-2, while Senduk falls to 6-1.