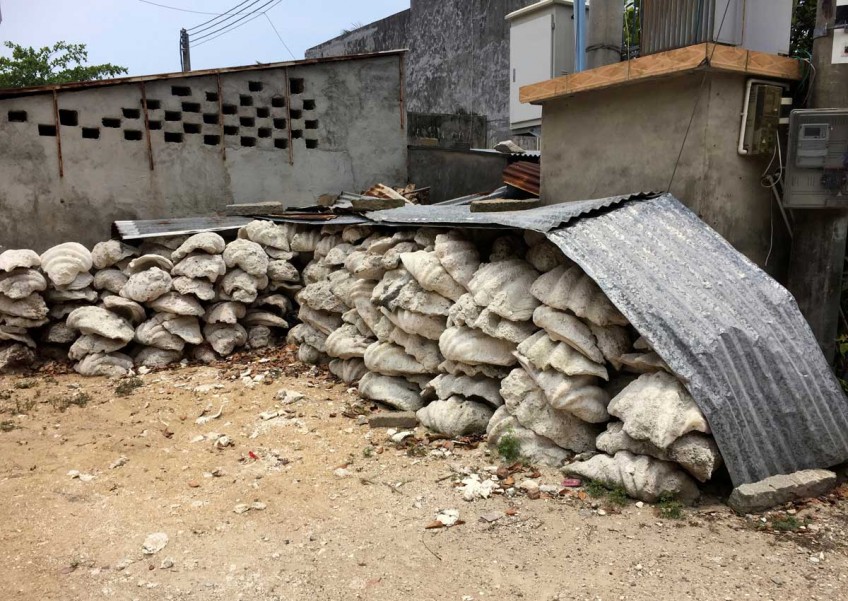 Giant clam shells are seen outside a factory in the seaside town of Tanmen in China's Hainan province May 10, 2016.
Reuters

TANMEN, China - Ornaments made from the shells of endangered giant clams, renowned in China for having auspicious powers and the lustre of ivory, have become coveted luxuries, a trend which has wreaked havoc on the ecosystem of the South China Sea.

China banned harvesting of giant clams last year but in the tiny seaside town Tanmen on the southern island of Hainan, most stores still sell products made from the over four-foot-wide shells.

The once sleepy fishing village has transformed over the past three years to harvest clams on an industrial scale. There are around 460 handicraft retailers, compared to 15 in 2012, with the industry now supporting around 100,000 people.

The price of giant clams has risen 40-fold over the past five years, while the plundering of the seabed has led to severe degradation of the reefs, scientists and academics said.

"With rising tensions in the South China Sea, Tanmen fishermen's important role in strengthening China's claims in the disputed waters and supporting the People's Liberation Army navy are recognised by the Chinese government," said Zhang Hongzhou, an associate research fellow at Nanyang Technological University in Singapore.

"As a result, authorities have turned a blind eye."

China claims almost the whole South China Sea, setting it at odds with rival claims from its Southeast Asian neighbours, including the Philippines. The region accounts for more than a tenth of global fisheries production.

The Qionghai government, which looks after Tanmen, announced in March 2015 that it would strictly enforce the ban on digging, carrying and selling of endangered marine species including the giant clams.

"The government is enforcing the ban," said Zhang Hongying, an official at the Qionghai government foreign affairs office. Another official called Zhao said the authorities were not doing anything to support the industry.

"If the business is legal, our government won't stop people doing it," he said. "But there's no government file saying that we are going to do something to promote the shell industry."

Fishermen said they had not been allowed to dig for clams since last year, while shop keepers said new supply remained tight.

To harvest the clams, the entire reef has to be dug up, said Neo Mei Lin, a marine biologist at the National University of Singapore.

"What used to be really good coral reefs in there have definitely been decimated over the last two to three years," Lin said.

Tanmen fishermen's income has more than tripled over the last three years, according to media, while the town has urbanized rapidly with neatly paved roads and modern buildings.

"I think the Hainanese have essentially taken out all the giant clam shells from the South China Sea, dead or alive," said Ed Gomez, a senior adviser at the University of the Philippines Marine Science Institute.

But during a recent visit to Tanmen, stores lining the harbour promenade were mostly empty. Many retailers said business had dropped since April due to China's tough economic climate and soaring temperatures.

"There are no tourists at the moment. We have to wait until September," said Yu Guo, owner of Xianyu Xuan craft store. Yu, from Beijing, came to Tanmen to buy property four years ago and set up the store with a local partner as the economy boomed.