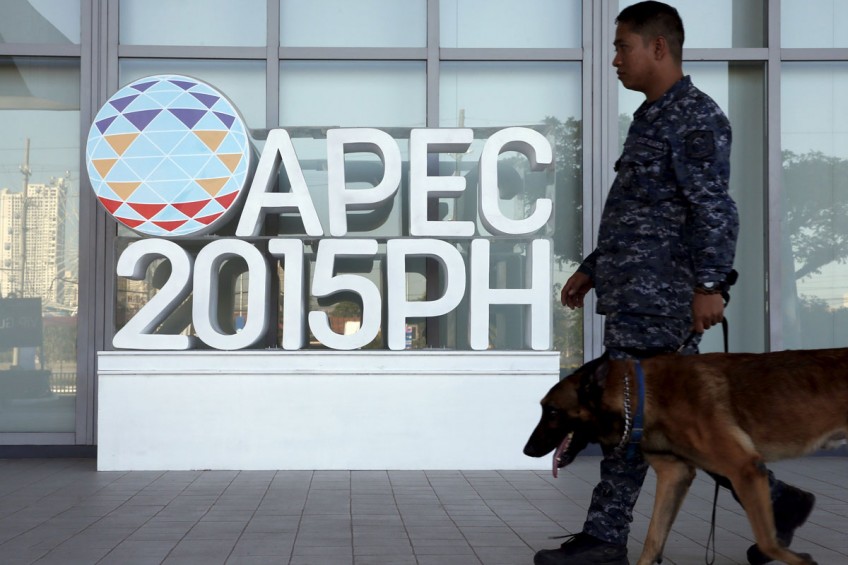 A military personnel walks past an APEC logo with his sniffer dog at the media centre of the Asia-Pacific Economic Cooperation (APEC) summit.
Reuters

THORNY American ties with China and the Paris terrorist attacks are expected to grab attention from trade issues at the Asia-Pacific Economic Cooperation (Apec) summit that will be held under extra-heavy security in Manila this week.

US President Barack Obama and the leaders of China, Japan, Mexico and other nations in the 21-member Apec bloc will converge along with 7,000 officials, CEOs and other participants on the Philippine International Convention Center by Manila Bay. Several days of meetings culminate with a two-day summit of leaders beginning on Wednesday.

Russian President Vladimir Putin will skip the Manila meetings, partly to focus on an investigation into the Oct. 31 crash of a Russian passenger jet in Egypt that killed all 224 people on board.

Putin will be represented by Prime Minister Dmitry Medvedev.

Indonesian President Joko "Jokowi" Widodo will likely be kept away by domestic problems too, according to Philippine officials.

Founded in 1989 in Canberra, Australia, Apec aims to demolish barriers to trade and investment through nonbinding accords.

The unwieldy grouping of countries and self-governing territories that range from liberal democracies to dictatorships accounts for 3 billion people, half of global trade and 60 per cent of world gross domestic product.

Critics say Apec has few concrete achievements because of its nonbinding status.

They dub it a talk shop and joke the acronym means "A Perfect Excuse to Chat."

But proponents believe those qualities are its strengths.

"That's exactly the beauty of Apec, you don't have to worry about committing yourself to anything because it's nonbinding," Philippine Finance Secretary Cesar Purisima said. "It gives leaders the freedom to bounce ideas, new ideas."

Members of the bloc are reluctant to have it deal with divisive security and geopolitical issues.

"Apec is about economic matters. We are not like the ASEAN (Association of Southeast Asian Nations) or some of the other arrangements that will include security issues," Allan Bollard, executive director of the Apec secretariat, said Monday.

But complex rifts and political strife often overshadow the annual show of unity that is symbolized by the photo-op of leaders dressed in a quirky or traditional shirt provided by the host country.

Friday's attacks in Paris that killed at least 129 people have already created a dilemma for Apec. The Islamic State (IS) group has claimed responsibility for the attacks on a stadium, a concert hall and Paris cafes.

Behind closed doors, senior diplomats were divided over whether Apec should issue a statement on the attacks or let each leader speak on his or her own.

As a compromise, these officials decided a paragraph on terrorism would be added to the statement that is always issued at the end of the summit.

One diplomat rejected any mention of the attacks in the statement, fearing it would bring Apec to the attention of IS, said a Southeast Asian diplomat who attended the meetings.

The diplomat spoke on condition of anonymity because the conversations were not intended to be public.

The diplomat said the United States wanted a strongly worded response and the decision on how Apec responds could still be changed when the leaders meet.

They have a precedent. Apec leaders issued a statement in Shanghai in October 2001 to condemn the terrorist attacks in the United States the month before and vowed to help combat terrorism.

Introducing any security topic in Apec's formal discussions is a touchy issue because a major member, China, fears that could pave the way for its territorial conflicts in the South China Sea to be put on the agenda.

Beijing says the disputes are an Asian problem outsiders such as the United States have no business dabbling in.

Two Filipino diplomats said Wang asked the Philippines to preserve the "political dignity" of Xi's visit to the Philippines, which is among the most critically outspoken of five governments territorially at odds with Beijing over the South China Sea.

China and the United States have been on charm offensives in Asia, an important battleground for economic and political clout.

The Apec summit is one more arena where that rivalry could play out.

Xi, analysts say, would be traveling to Manila on a headwind.

"The US image in the region is again on the rise and China's has taken a bit of a battering due to its actions in the South China Sea, the slowing growth of its economy," said Malcolm Cook of the Institute for Southeast Asian Studies in Singapore.

China's massive construction works to turn seven disputed South China Sea reefs into islands that could be used militarily have set off regional worries and criticisms, including from the United States and its allies.

Obama will likely discuss the friction over the South China Sea and military relations when he meets with the Apec host, President Aquino, on the sidelines of the summit, US Ambassador to the Philippines Philip Goldberg said.

Sources said Mr. Aquino and Japanese Prime Minister Shinzo Abe were also expected to agree on a deal paving the way for Tokyo to supply Manila with used military equipment, possibly including aircraft, that could be deployed to patrol the West Philippine Sea, part of the South China Sea within the Philippines' 360-kilometer exclusive economic zone but where China is also building artificial islands.

The Philippines and Vietnam are due to sign a strategic partnership deal governing how their navies will work together, a move that could anger China, which brooks no opposition to its claim over almost the entire South China Sea.

The United States does not recognise that expansive claim. Two US military patrols in seas claimed by China, including last week's flight by a pair of B-52 bombers near the artificial islands, have been welcomed by America's allies in Asia.

That and a new free trade deal called the Trans-Pacific Partnership, which the United States struck with 11 other Pacific Rim countries last month, add to Obama's prestige, said Ernie Bower, director of the Southeast Asia programme at the Center for Strategic and International Studies.

"Obama and the White House have done everything they need to do to be well prepared for a strong Asia trip," Bower said. "Obama will be received in Manila as an American leader who 'gets Asia' and is emphasizing US long-term interests."