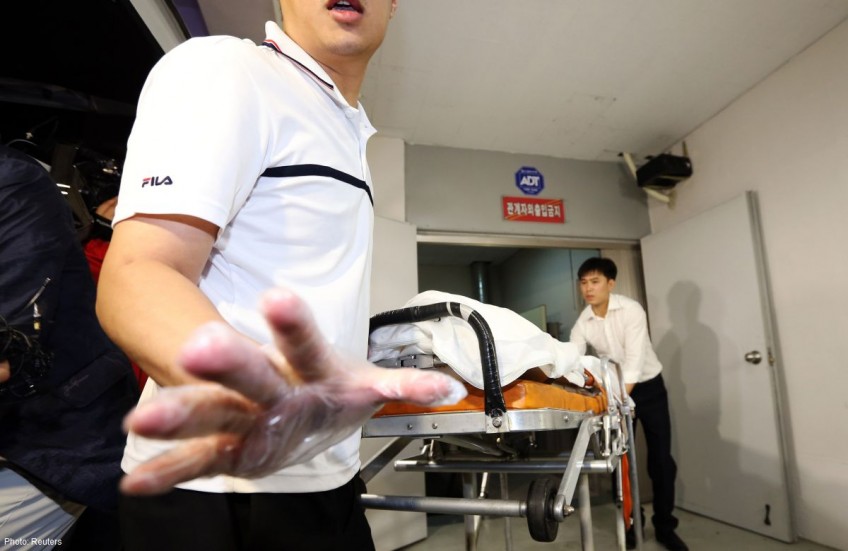 A boy ties a yellow ribbon dedicated to the missing and dead passengers of the sunken passenger ship Sewol, on a wire at Seoul City Hall Plaza May 1, 2014.

SUNCHEON/INCHEON - South Korea's most wanted man, whose heavily decomposed body was found in an orchard last month, had evaded arrest by hiding in an upstairs wall of a wooden cabin, with suitcases of cash at hand, prosecutors said on Wednesday.

The body of Yoo Byung-un, 73, wanted in connection with a ferry sinking in April, was only identified this week more than a month after he was found lying next to a copy of a book he had written, empty bottles of alcohol nearby.

When prosecutors returned to the cabin last month, acting on testimony given by an assistant, police found two suitcases that between them contained 830 million won ($810,800) and $160,000, prosecutors said.

The cabin is on the outskirts of Suncheon, in the south of the country, about two km from the plum orchard where the corpse was found.

Yoo headed the family that owned the company that operated the Sewol, a ferry that capsized on April 16 on a journey to the holiday island of Jeju, killing about 300 people, most of them schoolchildren.

The disaster triggered grief and outrage across the country - especially when video footage emerged of crew members abandoning ship while the children stayed in their cabins as instructed.

Yoo had managed to evade the country's largest manhunt in what had become a political headache for President Park Geun-hye, whose government came under heavy criticism for its handling of the disaster.

On Tuesday, police said a badly decomposed body found on June 12 by a farmer in the orchard had been identified with DNA and fingerprint evidence as Yoo.

Police said that beside the body was a book written by Yoo, along with an empty bottle of a shark-liver-oil health tonic, made by a Yoo family company, and empty bottles of alcohol nearby.

The police chief in charge of the case was sacked on Tuesday for not recognising the book, or putting two and two together, and for not identifying the corpse earlier.