A general view shows the central Gwanghwamun district during heavily polluted weather in Seoul on March 5, 2019.

China's firework displays during the Lantern Festival and stagnant air over the Korean Peninsula are the main culprits for the dangerously high levels of ultrafine dust pollution in South Korea at the end of February, a Seoul City-run environment agency said Wednesday.

"High density of ultrafine dust continued recently because the weather condition caused air over the Korean Peninsula to be stagnant and delayed diffusion of pollutants stemming within the country and from abroad," said Shin Yong-seung of the Research Institute of Public Health and Environment.

The agency traced the chemical elements travelling from China to South Korea on two occasions -- from Feb. 17 to Feb. 23 and from Feb. 27 to March 5.

Levels of strontium, barium and sulfate -- chemical elements used in fireworks and whose size are smaller than 2.5 micrometers in diameter -- soared 11.1 times, 4.1 times and 4.6 times, respectively, in the air in Seoul, 20 hours after the firework displays in China on Feb. 19. 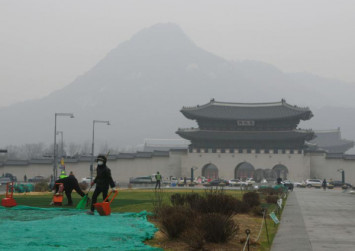 It took 17 hours to 30 hours for the ultrafine dust from Beijing and Shenyang to arrive in South Korea between Feb. 27 and March 3.

Air pollution is worsening every year, with the number of days with "bad" levels of ultrafine dust increasing and the density rising, according to the institute.

The number of days with "bad" levels of PM2.5 also increased from 12 in January and February 2015 to 23 in the same period this year.

Chemicals travelling from China could have been cleared with cold winds.

However, the atmosphere has been stagnant on the Korean Peninsula due to the lack of winds and warm temperature, and ultrafine particles continued to flow into the country from overseas, which worsened air pollution in Seoul, according to the institute.

Stagnant air is the result of "climate penalty," Shin said, adding measures to fight fine dust have to take into account how to mitigate climate change.

More than 70 per cent of the responsibility lay with China when levels of ultrafine dust were high in South Korea, and about 55 per cent on ordinary days, he added.