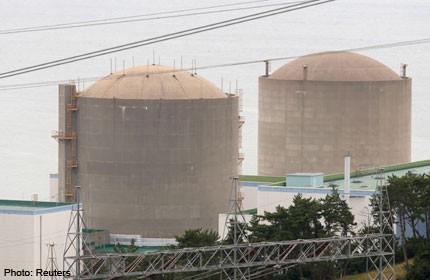 SEOUL - South Korea should reduce its reliance on nuclear power in view of public discontent with corruption in the industry and Japan's difficulty tackling the aftermath of the Fukushima disaster, a group weighing up the problem said on Sunday.

The Energy Ministry published the findings of a study group of 60 representatives from industry, academic institutions and civic bodies that recommended reducing to between 22 per cent and 29 per cent the portion of electricity that can be generated by nuclear power. That compares to 41 per cent proposed in a government plan for 2030.

Asia's fourth-largest economy currently generates one third of its electricity from nuclear power as part of long-term efforts to replace imported oil and gas.

Agreement on a range of 22-29 per cent was reached "based upon consensus to minimise social conflict over the proportion of nuclear power generation," the study group said in a statement released by the energy ministry.

The government will hold public hearings over the report's conclusions and plans to draw up final revisions to energy policy in December, it said.

The group also recommended keeping the proportion of renewable energy at 11 per cent as planned. It suggested imposing taxes on coal-fired power stations and lowering taxes on liquefied natural gas and kerosene.

Public discontent over nuclear power has been fanned by a scandal over the use of fake certificates which, since 2012, has prompted a series of reactor shutdowns in South Korea.

The nuclear industry has been criticised for breeding a culture of secrecy that led to corrupt practices among officials involved in safety certification.

Six of 23 reactors remain off line, including three halted in May to replace cables supplied using bogus certificates.

Authorities on Thursday said 100 people, including a top former state utility official, had been indicted on corruption charges.

The head of the group, Kim Chang-seob, said the figures provided were intended strictly as guidelines to take account of trends and growing discontent over the nuclear sector.

"Our suggestion is to set the direction in the policy for social consent, as there are huge social conflicts," Kim said.

Anxiety has also risen over repeated setbacks by the Tokyo Electric Power Company (Tepco) in its efforts to halt radiation leaks and make safe the Fukushima plant north of Tokyo, which was crippled by an earthquake and tsunami in 2011.

Tepco last Thursday said radiation levels in seawater just outside the plant had climbed to their highest level in two years.

Japanese Prime Minister Shinzo Abe has been criticised since he declared the problems at Fukushima "under control".

Japan's Nuclear Regulation Agency earlier this month ordered Tepco to draft in additional workers and report on its measures to tackle the clean-up.