Aged 70 she was working 20 hours a day in a hospital just to make ends meet.

Now at 75, Choi Soon-hwa is an unlikely fashion star and model in South Korea, one of a handful of seniors who have become social media and fashion celebrities in a country where intergenerational conflict is mounting as the population ages.

"I think of having this job at this age as a miracle," Choi says.

She is now the oldest professional model in the South, and has walked the runway at Seoul Fashion Week. It is a far cry from her life even just a few years ago when she was a care worker, forced to take long shifts often seven days a week.

"It was hard to even get myself lunch. The stress was excruciating - it was as if a volcano was about to erupt inside me," she confesses, adding that she was in heavy debt and all her earnings were spent paying off loans.

Around 45 per cent of older people in South Korea live in relative poverty and the country has one of the weakest social safety nets among developed nations.

By chance, Choi saw a TV commercial about senior models and saw an opportunity to make a change. She decided to enrol in classes and was snapped by agency The Show Project and made catwalk debut soon after.

When she worked at the hospital, she says she had to dye her hair as patients didn't want someone who "looked too old" to look after them. Now her pale locks have become an asset to a new generation of designers who value distinctiveness.

"I make clothes for those in their 20s and early 30s," explains Kim Hee-jin, a 32-year-old designer who hired Choi for her Seoul Fashion Week show last year, where the senior model donned a bright purple padded jacket, red tights and a dress adorned with an English-language obscenity.

"There is something very unique about Choi - she has a quality that is different from anyone else [in her generation], and I thought it goes well with the kind of originality that I strive to achieve when making clothes." 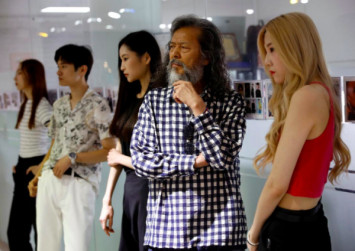 This echoes a new-found trend in Western markets, where brands now choose models who reflect the diversity in society and social media.

In the past five years, catwalks globally have seen greater age diversity and models such as Jacky O'Shaughnessy, Jan de Villeneuve, and Elon Musk's mother Maye Musk, making names for themselves as fashion stars in their 60s and 70s.

"This country was very poor when I was young," says Choi, who confesses she grew up admiring clothes worn by children at orphanages - children in such establishments in post-war South Korea were the beneficiaries of donations from the US.

Her adult life was also one of hardship. After her husband abandoned her and their two children - simply leaving home one day and never returning - she was forced to juggle working full-time while being a lone parent in a nation that can be hostile to single mothers.

"During my years as a single parent of two kids I would wear the same clothes for as long as 20 years," she says.

Today, South Korea is home to a 43 trillion won (S$49.5 billion) fashion industry but Koreans aged 60 or older spend an average of 38,000 won a month on clothes and shoes while those under 40 spend three times as much.

Now in her mid 70s, Choi says her generation had been "forcing themselves to be too frugal" and says now is the time to try and live her own life.

Choi and other older celebrities have captured the imagination of South Korea's youth and garnered large numbers of acolytes online, providing a small link between generations that are increasingly divided both politically and socially.

Fellow senior model Kim Chil-doo, age 64, has some 75,000 followers on Instagram, while 72-year-old Park Mak-rye, whose posts include make-up tips, is a YouTube sensation with more than 400,000 fans.

But with the nation facing a demographic crisis, and the ratio of elderly to those of working age set to soar, tensions are mounting.

Use of derogatory terms to describe senior citizens - such as teulttakchung, meaning a 'denture-wearing insect' and yeongeumchung, a 'pensioner insect' - has become more common.

A study by the state-run Human Rights Commission found more than half of those aged 19-39 were worried measures to encourage job creation for the old would reduce opportunities for the young.

But for many older people, making a life change like Choi is not "even imaginable" according to Michael Hurt, a sociologist at the University of Seoul.

"Opening a social media account while photographically documenting yourself all the time isn't something they know even exists, let alone something that they would actually do," he says.