South Korea's former leader Park Geun-hye makes her first public appearance on Tuesday since her arrest in March, standing trial on bribery charges over a corruption scandal that brought down her presidency.

Park faces more than 10 years in jail if found guilty of taking bribes from business leaders, one of the key accusations that led to her impeachment, making her the country's first democratically elected leader to be removed from office.

Park has denied any wrongdoing and is expected to plead not guilty at the trial.

The first day of arguments on Tuesday comes two weeks after the election of President Moon Jae-in, who has promised to get tough on chaebol bosses who commit crimes, and has named a respected investigator to head the office prosecuting the former leader.

Park is expected to appear at the Seoul Central District Court at 0100 GMT with the friend she is accused of colluding with to solicit money, Choi Soon-sil. Choi has also rejected the bribery charges. 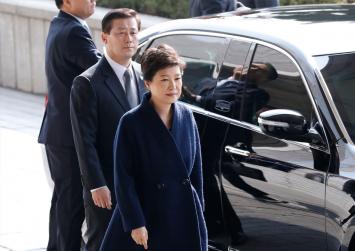 At the court hearing Park and Choi are likely to be reunited for the first time since the scandal erupted in public in late October, seated near each other as defendants.

It is Park's first appearance since being arrested on March 31, three weeks after she was removed from office by a Constitutional Court ruling and after a warrant judge decided she posed a flight risk and was likely to tamper with evidence.

The controversy surrounding her secretive lifestyle and eccentric personality did not end with her departure from the presidential Blue House. An animal rights group has filed a complaint with the police against her for abandoning nine dogs she left behind in the presidential compound.

Media reports have said she spent her time in her prison cell reading the English dictionary and keeping away from the news available for inmates.

She is believed to have been kept away from the head of the Samsung conglomerates, Jay Y. Lee, one of the business leaders accused of paying into the funds set up to back Park's policies. 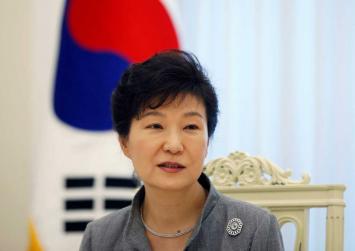 The Seoul Central District Court held a lottery last week for the 68 seats available for the public, drawing more than 500 people, most of them young people in their 20s and 30s.

Heo Go-eun, a 22-year-old university music major said she had cut her classes that day to enter the lottery.

"This will remain a page in history and I wanted to see for myself Park on trial," said Heo, adding she had participated in the candlelight rallies last year that drew millions of South Koreans to the street in peaceful protests.

"So many people are just happy Park has been impeached, that she has already paid the price for her crimes but this is just the beginning."