American university student Otto Warmbier, who had been held prisoner in North Korea for 17 months, died at a Cincinnati hospital on Monday just days after North Korea released him from captivity in a coma, his parent said.

Three other US citizens, who are ethnic Koreans, and six South Koreans remain in custody in North Korea.

Warmbier, 22, who was arrested in North Korea while visiting as a tourist, had been described by doctors caring for him last week as having extensive brain damage that left him in a state of "unresponsive wakefulness".

Read Also
US student dies after release from N. Korea 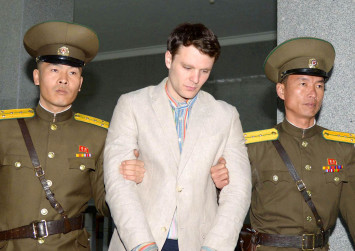 US President Donald Trump blamed the "brutality of the North Korean regime" for Warmbier's death.

South Korea's Blue House on Tuesday cited Moon as saying "it is very deplorable that North Korea does not respect human rights".

The South Korean government will make every effort for the return of those held in North Korea, a presidential spokesman Park Soo-hyun told a briefing.

North Korea said last month it was its sovereign right to"ruthlessly punish" US citizens it has detained for crimes against the state.

Korean Americans Tony Kim and Kim Hak Song who worked at the foreign-funded Pyongyang University of Science and Technology (PUST) were recently detained for hostile acts against the state, according to North Korea's state media.

North Korea is also holding Canadian pastor Hyeon Soo Lim. He was charged with subversion and given a hard labour life sentence in 2015.

Tensions on the Korean peninsula have been heightened by dozens of North Korean missile launches and two nuclear bomb tests since the beginning of last year. Pyongyang has also vowed to develop a nuclear-tipped intercontinental ballistic missile capable of hitting the US mainland.