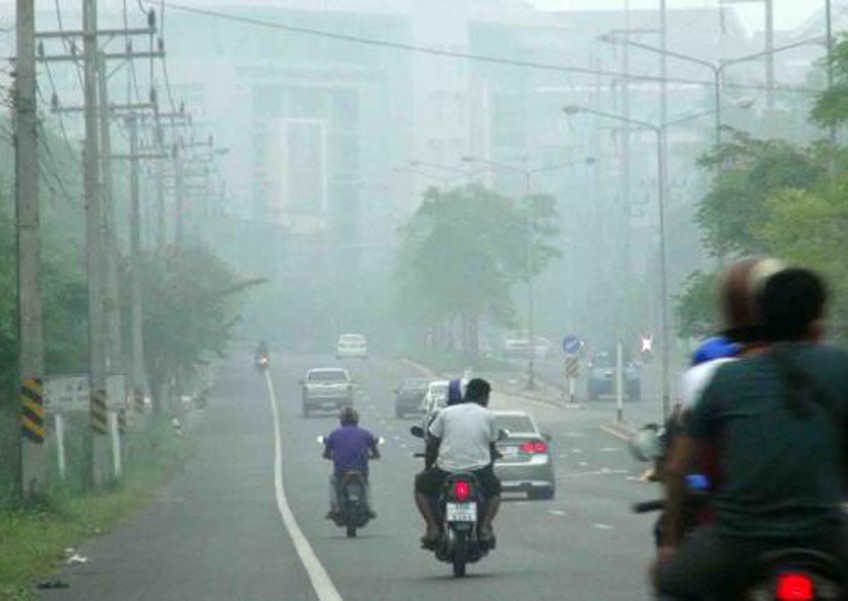 As of yesterday, the amount of particulate matter (PM) of up to 10 microns in size (PM10) reached 369.0 micrograms per cubic metre of air in Hat Yai, the economic hub of Thailand's South.

People are considered safe only when the PM10 does not rise above 120 micrograms.

In 1998, the PM10 in Songkhla skyrocketed to 459.5 micrograms per cubic metre of air. Locals had hoped that such a seriously hazy situation would never recur.

But yesterday, although the PM10 did not yet beat the previous record, air pollutants were clearly visible in Hat Yai, even to the naked eye. The problem is widely blamed on Indonesia's forest fires.

Officials in Songkhla province were busy handing out facial masks to help locals cope with the health impacts.

"People need to get proper healthcare," he said, "They also need to get advice. For example, they should avoid staying outdoors with the haze raging on. If they develop tightness in the chest or have difficulty breathing, they should immediately seek medical help".

According to Sansern, the prime minister is very concerned about the haze, which has blanketed Thailand's South. All relevant authorities are now ordered to closely monitor the situation and extend help to people.

"Local administrative bodies, on their part, can help ease the pollution by spraying water in the air," the government spokesman said.

Sansern said the government has already contacted Indonesia about the haze, and Indonesia said it was sorry about the pollution caused.

As haze significantly reduced visibility, flight services to and from Thailand's South have been affected.

Executives of schools in Songkhla are now allowed to decide whether temporary closure is necessary should the PM10 rise above 350 micrograms.

So far, Songkhla has not been declared a disaster-hit zone as authorities are worried that such a declaration may affect local tourism.

"The average PM10 amount during the past 24 hours has finally reduced. It dropped from 369 to 365 micrograms per cubic metre of air if we concluded the measurement at 4pm Thursday," he said.

He believed stronger winds had benefited Thailand, as the haze was pushed away faster.

In Surat Thani, several flights to Samui Airport were delayed yesterday because of the haze.

"Many flights could not land in the morning. They had to wait until the afternoon," said Surat Thani Governor Wongsiri Promchana.

He said he had also advised locals to turn on the headlights of their vehicles when driving in hazy areas.

Wongsiri said all tourist attractions were still open as normal as of now.

Flight services in the southern provinces of Trang and Krabi are also affected.

In Trang, locals yesterday urged relevant authorities to help tackle the haze problem that had recurred every now and then.

"It has affected us adversely. I feel uncomfortable because the haze has made it hard for me to breathe," Areerat Boonprasert, 52, said.