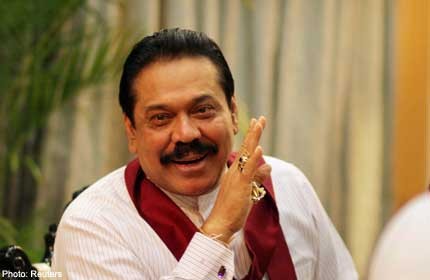 Sri Lanka's president Mahinda Rajapaksa said in his speech that the development was a good example of the government's cooperation with Sri Lanka's private sector, and would benefit the next generation.

Sri Lanka's president Mahinda Rajapaksa, on Monday, declared open the new Colombo South Port built at a cost of US$500 million with an Asian Development Bank loan of $300 million and the balance from the Sri Lanka Ports Authority (SPLA).

Following the commissioning ceremony by the president, the port's first terminal - its South terminal which was build by the China Merchant Holdings International on a 30-year "Build, Operate and Transfer" agreement with Sri Lanka" - began operations. Under the agreement, the SPLA also holds a 15-per cent stake in the first terminal.

The expansion of the existing Port of Colombo includes brand new first-class facilities. Its 18-metre draft has the capacity to accomodate the largest "triple-E" class vessels carrying up to 18,000 containers.

In his speech, Rajapaksa said that the development was a good example of the government's cooperation with Sri Lanka's private sector, and would benefit the next generation.

The project was launched in 2006 to cater to the increasing demands for upgrade in services in the Indian Ocean international shipping industry.

With its new facilities, the Port of Colombo will be the only port in South Asia with a deep-water terminal for mega container ships with depths of up to 18-metres, enabling it to take in large cargo ships that require deeper docking berths. Previously the port could only accomodate containers up to 15 metres in depth.

The upgraded port's main terminal was build by private corporations, and all three of its terminals - each 1,200 metres in length - is equipped with facilities to accomodate three berths. They are expected to be able to handle up to 75 million twenty-foot equivalent units (TEU) of cargo per year, SPLA chairman Priyath Bandu Wickrama said.

The South terminal was declared open and operations-ready on Monday, while the East terminal will start operations next year, he said. Overall construction on the ports are expected to be completed by year 2020.

Under the Colombo Port Expansion Project (CPEP) 10,000 direct and 15,000 indirect employment opportunities have been created, said a government spokesperson.

Located on a major shipping route, the Colombo port is a major port in the ASEAN region.