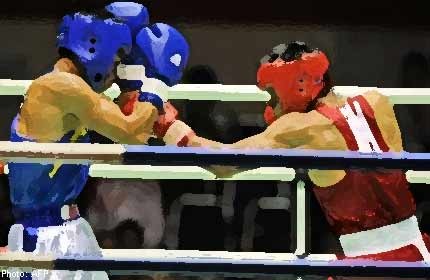 Photo illustration of a boxing match.

JAKARTA - At least 17 people were killed and 39 injured in a stampede triggered by fighting among fans after a boxing match on Sunday in the remote Indonesian province of Papua.

The fighting was sparked by a dispute over scoring for the match, prompting some 1,500 spectators to try to flee the stadium in Nabire city in the country's resource-rich, eastern-most province, said deputy national police spokesman Agus Rianto.

Media reports said the stadium had only two working exits.

"There were military and police personnel present in the stadium, but with so many people panicking ... the situation quickly got out of control," Rianto told Reuters.

Most of the dead were women. Among the injured were 17 men, 13 women and nine children.