The office of the Japan Marrow Donor Program (JMDP) has received a flood of inquiries asking how to be a donor, in response to the recent announcement by teen star swimmer Rikako Ikee that she has been diagnosed with leukaemia.

The JMDP received six inquires on Monday but the number suddenly jumped to 270 on Tuesday when the 18-year-old gold hopeful for the 2020 Olympics made her announcement. The office continued to receive inquires, with about 100 phone calls on Wednesday.

"We expect many people to understand and support [our efforts]," a JMDP official said.

According to the Tokyo-based office, it has been receiving queries by phone and email along the lines of, "I saw the news, can I do something to help her?" since 2pm Tuesday when Ikee tweeted about her disease. High traffic also made it difficult to connect to their website. 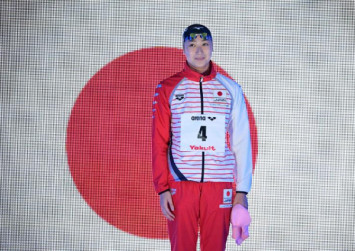 Leukaemia patients cannot produce normal blood cells, and one form of treatment involves hematopoietic stem cells being harvested from healthy bone marrow then injected into the patient by infusion.

The JMDP solicit donors of hematopoietic stem cells under a registry system. As of the end of December last year, there were about 490,000 registered donors and 2,930 registered patients waiting for treatment. However, it is necessary for the types of human leukocyte antigen (HLA) between donors and patients to match before treatment can be undergone.

The chance of a successful HLA match is one in four between siblings, and the probability becomes quite low between unrelated individuals, only one in several hundred or one in tens of thousand. The JMDP has been urged to increase the number of donors.

Would-be donors can apply at local blood-donor centres and take a blood test.

'I WILL COME BACK'

"God will not let you be tempted beyond what you can bear. I believe there's no wall that I can't surmount," Ikee tweeted Wednesday night. "I appreciate very much the messages and support from you. I promise to come back." 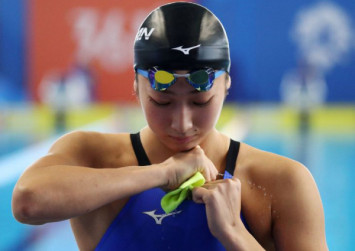 In her tweet, she expressed her determination to fight the disease and thanked her fans for their encouragement.

In response to the social reaction to her announcement, such as the flood of inquires to the JMDP, Ikee said: "I've received many messages. Those messages really bring hope not only to me, but also to people who are suffering the same problem."

In response to Ikee's announcement, Yoshitaka Sakurada, minister for the Tokyo Olympic and Paralympic Games, was found to have said he was "really disappointed" and "slightly worried that the public excitement [toward the Games] could wane."

At the House of Representatives Budget Committee on Wednesday, Sakurada admitted that he made such remarks and said the comments "lacked consideration" and "I apologise and withdraw [the remarks.]"

Opposition parties demanded he resign, but Sakurada rejected this, saying he would "fulfil his duties at any cost."