A state of suspended animation 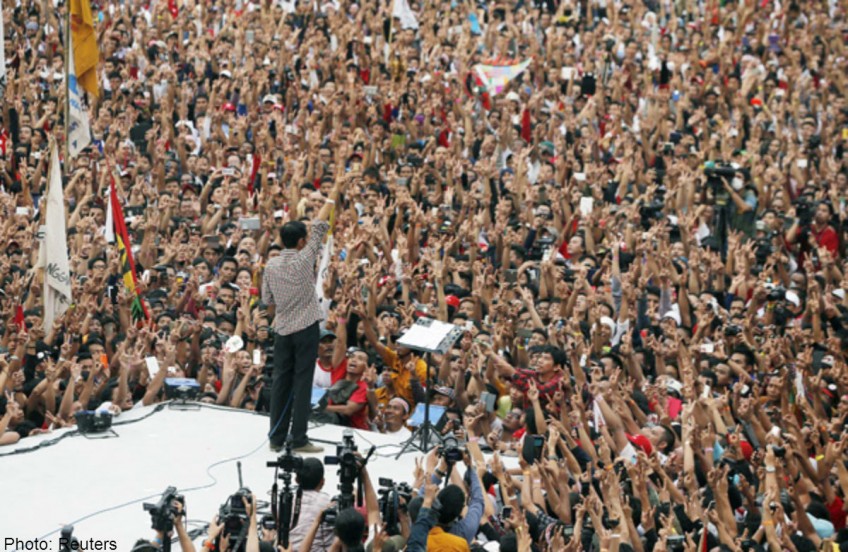 It has all the hallmarks of World War II's Phony War, but bombast and losing poll counts aside, Great Indonesia Movement (Gerindra) presidential candidate Prabowo Subianto is perfectly justified in waiting for the General Election Commission's (KPU) official election result next week.

Ahead by an average of five percentage points on eight quick counts - most by pollsters with credible track records - his Indonesian Democratic Party-Struggle (PDI-P) rival Joko Widodo is equally justified in declaring victory in the July 9 election. Who wouldn't?

If the official count is any reflection, it will be difficult for the retired special forces general to mount a challenge in the Constitutional Court when confronted by a gap of six-to-seven million voters. Turning that around has never been done before.

Still, there's an uneasy feeling in the Joko camp that the phony war is preparing the ground for just that.

Mr Prabowo lost out in a power struggle when father-in-law president Suharto was forced from office in 1998. He's not going out with a whimper this time.

Make no mistake, this isn't a deadlock. Quick counts are remarkably accurate. All Mr Prabowo can probably hope for is that the official count is considerably closer to the 51-48 per cent registered by the Populi Centre, the most favourable to him among the eight pollsters.

The four other surveys he points to which give him a narrow winning margin were conducted by companies with less than stellar reputations.

But whether Mr Prabowo, who declared on election day that "losing is not an option", is willing to push the envelope to the limit is still in question. His problem is that his critics always see the worst in him, so deeply ingrained in the public psyche are his past misdeeds.

He may well surprise everyone and gracefully throw in the towel. That's the complex nature of a reputed autocrat who flies off the handle one minute and is capable of unheralded acts of kindness the next.

By last weekend, more than 80 per cent of the ballot papers had been delivered to the KPU's Jakarta headquarters, with leaked reports indicating that Mr Joko was maintaining a 5 per cent lead in the official tally.

Among Mr Joko's closest advisers is business partner Luhut Panjaitan, 66, a retired special forces general, former trade minister and ambassador to Singapore who at this early stage is already widely tipped to be the new chief security minister.

Mr Panjaitan and a cabal of other retired generals put together the so-called Bravo Lima, a network of civilian volunteers and service veterans that carried the ball for Mr Joko until the PDI-P finally put its full weight to the wheel in the last two weeks of the campaign.

Given Mr Prabowo's background and the military's penchant for favouring one of their own over a civilian, special forces chief Major-General Agus Sutomo had received calls from retired senior officers in the Joko camp reminding him of his duty to remain neutral.

Similarly for national police chief General Sutarman, an adjutant to late president Abdurrahman Wahid. But there was probably little reason for concern there. The police and the military have never got on, and Mr Prabowo has vowed to clean up the force.

With PDI-P leader Megawati Sukarnoputri staying back to avoid looking like a puppet master - and daughter Puan Maharani strangely invisible - Mr Joko struggled to understand why it took the party so long to release much-needed campaign funds.

All this suggests Mr Joko will feel justified in insisting on a free hand in the selection of his Cabinet, thereby providing an early demonstration that he is his own man and not the patsy he has been portrayed as by his political opponents.

"It's going to be on his terms," says Mr Panjaitan, whose Kalimantan timber company supplies Mr Joko's furniture factory with mahogany. "He listens and he is accommodating, but it doesn't mean you can dictate. This guy is different."

Mr Joko has said on several occasions that he wants professionals for key ministerial posts, perhaps as many as a third of the current 34-strong line-up, which will be shortened by the proposed re-merger of the trade and industry ministries.

That's assuming, of course, that everything stays on its current course, and he takes over the presidency from Dr Susilo Bambang Yudhoyono on Oct 20.

What happens in the next week will decide whether it is smooth sailing or a stormy passage.