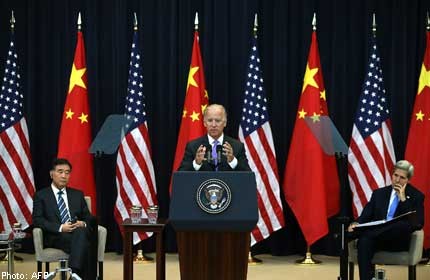 US Vice President Joseph Biden (C), speaks while Chinese Vice Premier Wang Qishan (L), and US Secretary of State John Kerry (R) listen during the opening session of the US and China Strategic and Economic Dialogue.

WASHINGTON/BEIJING - High-level talks between China and the United States got off to a fiery start with US Vice-President Joseph Biden telling Beijing to stop its "outright" theft through hacking.

"We both will benefit from an open, secure, reliable Internet. Outright theft that we are experiencing must be viewed as out of bounds and needs to stop," Mr Biden said in his opening remarks at the two-day Strategic and Economic Dialogue (S&ED).

The Chinese also had an earful on Wednesday from US Treasury Secretary Jacob Lew, who urged China to honour its promises to open up its economy to competition and adopt more flexible exchange and interest rates.

"I will encourage China to follow through decisively on the important commitments it has made to transition to a more balanced and sustainable pattern of growth," he said, adding that this was critical to China's success and consequential to the world economy.

The talks, intended to hammer out ways to broaden trade and investment as well as to seek common ground on strategic issues such as cyber security, North Korea and maritime disputes, will be closely watched for the outcomes.

It could lead to a breakthrough in the form of a bilateral investment treaty, but may be overshadowed by differences over Internet security.

China has been angered by revelations of US electronic surveillance by former American security agency contractor Edward Snowden. But the US continued to press Beijing on its alleged espionage of US agencies and major corporate organisations.

However, Mr Biden on Wednesday also sought to set a positive tone for the talks, stressing mutual trust in the relationship.

The dialogue will feature a new line-up of economic policymakers and diplomats, following a leadership reshuffle in both countries. This means many of the heads of 14 US government agencies and 16 Chinese state bodies will meet for the first time.

Secretary of State John Kerry and Mr Lew, together with their Chinese interlocutors, Vice-Premier Wang Yang and State Councillor Yang Jiechi, are helming the meetings. All four took on their current roles less than half a year ago.

"A highlight of this round of dialogue will be establishing a good working relationship between the new leaders," said Renmin University professor Jin Canrong.

Observers hope more concrete outcomes will emerge from this fifth round of talks, building on agreements forged by US President Barack Obama and China's new top leader Xi Jinping during a summit in California last month.

In the past four years, the dialogue has drawn some criticism for failing to yield substantive results.

"In some circles in Washington, there is deep scepticism about the utility of continuing the US-China S&ED," wrote US-based China scholar Pei Minxin on China-US Focus, an online platform discussing bilateral ties, on Tuesday.

Peking University international economics expert Zha Daojiong pointed out that "without the dialogue, there would probably be more clashes and less willingness to consult with each other on issues".

The two sides on Wednesday held a separate session by a new cyber security working group for the first time. State news agency Xinhua said the "candid, in-depth discussions" set the stage for another informal meeting.

This helps to defuse tension and shift the focus to other issues such as North Korea, where the US may press Beijing to take a tougher stance on Pyongyang's denuclearisation and disputes in the East China and South China seas, noted analysts.

The economic track of talks will likely see a resurfacing of perennial issues such as lifting of a US ban on high-tech exports to China, and a push for US firms to get greater access to China's markets.

One highlight of the talks may be a bilateral treaty to lower barriers for each country's firms to invest in the other's market.

"One would not rule out a major milestone being reached in negotiations, or the signing of the treaty," said Professor Zha.