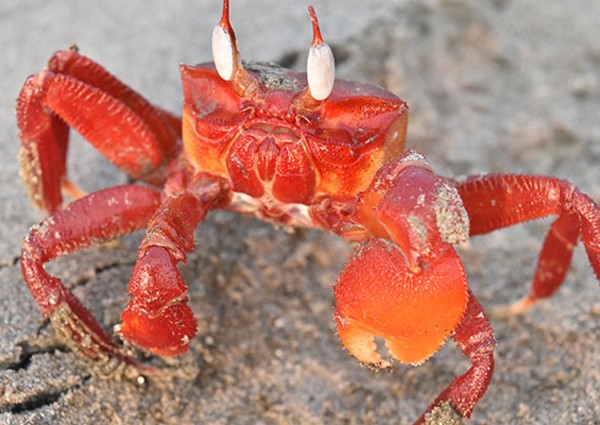 The serene beach of Kuakata remains covered with hundreds of tiny red crabs - some moving around while some digging nest.

Apart from the beautiful sandy beach that makes Kuakata one of the top tourist destinations in Bangladesh's southeast, it has many other things to offer.

The serene beach remains covered with hundreds of tiny red crabs - some moving around while some digging nests. They can also be spotted near the estuary of the Andharmanik river, some 5 km west of the zero point.

However, their number has drastically reduced over the last few years. Tourists visit the place mostly on motorbikes.

However, the crabs quickly disappear into the sand whenever they hear any sound.

"Thousands of red crabs used to move around the beach and I used to think that someone had laid a red carpet on the beach," Sabuj Hawladar, a biker, told The Daily Star. He carries tourists to different spots on his vehicle.

"But nowadays, red crabs have reduced greatly," he remarked.

Mostofa Ali Reza Hossain, a professor of fisheries biology and genetics of fisheries faculty at Bangladesh Agricultural University in Mymensingh, said, "The number of red crabs is disappearing from the beaches of Kuakata due to disturbances by tourists, sound pollution and environment pollution."

Other human interferences cause habitat destruction for the species.

Not only in Kuakata, one would find the same picture in Cox's Bazar and Teknaf where red crabs have reduced significantly over the years, said the marine life expert.

According to locals, about 200 motorbikes carrying hundreds of tourists run on the beach every day.

Prof Mostofa said, "The sound produced from bikes d recommends that the animal's habitat be protected rives away a good number of crabs and they start running. Sometimes they cannot find the directions to their nests. Some even die this way."

A number of dead red crabs were seen on the beach when this correspondent visited the island recently.

When some pictures of the dead crabs were shown to Prof Mostafa, he said those were young crabs and that their deaths were not natural.

ABM Sadiqur Rahman, upazila nirbahi officer of Kalapara, said they plan to build a marine drive along the 18 km Kuakata beach so that bikes could run at a safe distance.

A project for constructing a 2-km marine drive on both sides from the Kuakata Zero Point has been taken, he added.

Red Ghost Crab is in the "least concern category" on the red list for Bangladesh of International Union for Conservation of Nature (IUCN). But it recommends that the animal's habitat be protected.