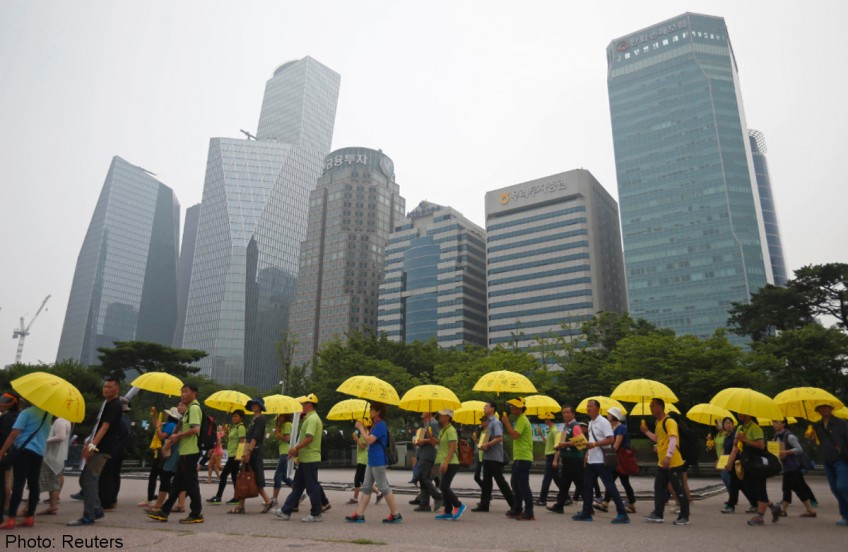 People holding yellow umbrellas in support of victims of the mid-April Sewol ferry disaster, carry boxes containing signatures of South Koreans petitioning for the enactment of a special law after the disaster, as they march towards the National Assembly at Yeouido Park in Seoul July 15, 2014.

SEOUL - More than 30 student survivors of South Korea's ferry disaster marched on parliament Wednesday to press demands by victims' relatives for an independent inquiry into the tragedy that claimed around 300 lives.

The students accompanied by their parents had left their high school in Ansan, south of Seoul, on Tuesday to walk the 20 miles (32 kilometres) to the capital's National Assembly building.

The 6,825-ton ferry Sewol sank in waters off the country's southwest coast on April 16 with 476 people on board.

Of the total passengers, 325 were teenaged students from the same Danwon High School in Ansan. Only 75 of the students escaped alive.

The march was in support of victims' families calling for the swift passage of a special bill that would set up an independent inquiry into the causes of the tragedy.

"Three months have passed since the Sewol disaster, but the true picture of the tragedy is still shrouded in mystery," the families said in joint statement.

The relatives want representation on the inquiry panel, which they insist should be endowed with prosecutorial powers.

The bill is currently stuck in parliament because of a split over the legal foundation of the proposed investigation.

Some family members have embarked on symbolic hunger strikes to push their demands and have collected a petition with 3.5 million signature calling for the bill to be adopted.

Three months after the Sewol sank, dive teams are still attempting daily searches of the submerged vessel for the bodies of the few remaining victims still unaccounted for.

Fifteen Sewol crew members are currently on trial, including the captain and three senior officers who are accused of "homicide through wilful negligence" - a charge that can carry the death penalty.

The bulk of the charges arise from the fact that they chose to abandon the ferry while hundreds of people were still trapped inside.

President Park Geun-Hye and her administration has been bitterly criticised for its response to the disaster, which stunned the entire country.

A report by the state auditor last week said the sinking was a "man-made disaster" created by negligence, corruption and greed.