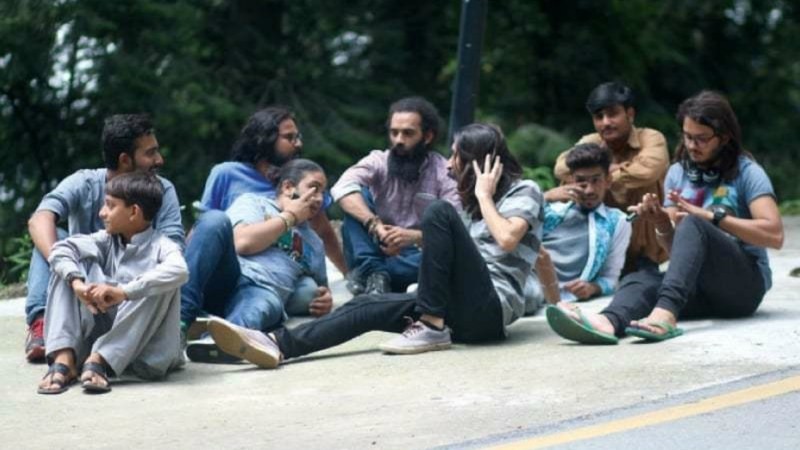 Passionate souls make their way out with sheer dedication and great effort. Art of any sort, be it performing or visual, needs a great deal of commitment to reach a point where one starts getting recognised.

It's a story of six young instrumentalists from Lahore who want to prove wrong the common perception that an artiste [merely through his work] cannot survive financially.

Teen Taal is a Sufi instrumental band from Lahore formed in 2013. The founder of the band, Vicky Hussain, was once asked on Facebook by a musician that can he and musicians like him survive in this society through singing. Hussain did not reply him, however, [he] started pondering over the question and then finally decided to answer the query in the practical form.

He and five other musicians decided to move from one city to the other to play music on roads and earn money.

These six musicians Vicky Hussain (guitarist and a student of National College of Arts musicology department), Zaigham Abbas (a Dhol player), Syed Fawad Ali (rhythm guitar and doing A levels) Sohaib Sheikh (bass guitar doing BBA from UMT) Michal Ghouri (keyboard player and music teacher) and John Peter (tambourine player and doing matriculation) decided to visit cities to perform on roads. They had neither money nor their own vehicle except for the fare to reach Rawalpindi, the city they decided to perform first.

Vicky Hussain while sharing details of the music 'expedition' [without money and resources] told Dawn that they reached Rawapindi and performed at Saddar.

"After the first performance we announced that we are performing not only to give boost to public performances on roads but also to prove the fact that an artist can't die of hunger and unavailability of money if one knows one's art".

He said they also placed a box at each performance venue requesting people that they had nothing in their pockets and were playing music to earn; if anybody likes to drop in money in the box it's one's own sweet will.

To Vicky, the response at Saddar was just superb and many people gathered to enjoy their music. Their next destination was New Murree where the festival of Sufi saint Lala Badsha was going on. They drew a tremendous response at the festival too.

Their difficult phase started at Murree when they began playing their instruments on the stairs of GPO on The Mall. Police came and asked them not to play as they didn't have No Objection Certificate (NOC).

On an average they earned Rs15,000 to Rs16,000 per city proving the perception wrong that artistes can't earn through public performances

"We were in a fix what to do now but God is kind enough some traffic wardens extended us help and they provided us a place near Kashmir Point for the performance which we got after going through a lot of trouble. The group started performing at Kashmir Point at around 1.30am," he said.

Vicky said some employees of TMA were also among the listeners and invited them to perform at night as well there saying no one would bother them.

Hussain told this reporter that on an average they earned Rs15,000 (S$200) to Rs16,000 per city proving the perception wrong that artistes can't earn through public performances.

Their next destination was Islamabad but to their bad luck section 144 was imposed there as Panama scene was in full swing and they did not know about it. "We requested some people there in F-7 for performance who suggested us a nearby food court as venue," Hussain said.

They were performing in the food court when someone called 15; police riding two bike came for taking them to police station. The cops asked them about their transport. Seeing 23 bags of instruments, the personnel did not arrange for any cab or vehicle and let them free, he said.

The group finally performed near Ayubia Chairlift and meanwhile they received a phone call from Muniba Mazari, a social worker, who offered them to perform at a place in Islamabad where they also performed.

Vicky Hussain said his next tour [of such kind] will be with street theatre folks.

He believed that instead of dreaming big [of becoming Atif Aslam or any other icon] an artiste should do what is possible for him.