Survey on acceptance in Indonesia gives hopes to LGBT community

A passerby hugs an activist campaigning for the rights of the lesbian, gay, bisexual and transgender (LGBT) community during Car Free Day in Jakarta on June 28, 2020.

A recent survey about homosexuality acceptance in Indonesia has given gay and human rights activists some hope for a future where the lesbian, gay, bisexual and transgender (LGBT) community could live without fear of persecution.

United States-based Pew Research Institute polled 38,426 respondents across 34 countries from May to October last year and found that 9 per cent of Indonesians agreed that homosexuality should be accepted by society, an increase from only 3 per cent in 2013.

Despite the low figure, prominent LGBT activist Hartoyo remains optimistic, seeing the growth from 2013 as a sign that those supporting LGBT people had not remained quiet.

"Even though the number is still small, I strongly believe that they are changemakers," he told The Jakarta Post on Friday.

"I am very optimistic because there are no fundamental reasons to reject the existence of the LGBT community as human beings," he said, citing the global movement in supporting LGBT people as a supporting factor.

"Maybe one day, we can reach a 40:60 ratio where the 40 per cent support LGBT people. But those 40 per cent would be the ones making decisions for this country."

"I thanked the [LGBT] allies for joining our fight for human rights enforcement and diversity," he told the Post.

"And for the public, don't foster hate against someone just because they are different from you, whether in terms of ethnicity, religion, sexual orientation, or gender identity and expression."

Human Rights Watch activists Andreas Harsono also credited the movement from the LGBT community itself as being a driving factor behind the increasing public acceptance.

"I believe that they are the ones that have provided well-executed public education, not the government," Andreas told the Post Saturday.

However, he also noted that many conservative groups, such as radical Islamic organisations, were still disrupting acceptance toward LGBT people. 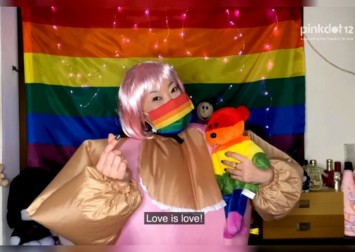 Furthermore, discrimination from the government and law enforcers remain as several regulations still discriminate against the LGBT community.

For example, the family resilience bill introduced by the House of Representatives earlier this year, which was slammed for trying to regulate domestic affairs, stipulated that family members should report any “sexual misconduct”, including homosexuality.

The 2008 Pornography Law is also used to criminalise LGBT people, at least three times since 2017, to raid and prosecute individuals participating in alleged “gay sex parties”.

However, he said the low 9 per cent rate should be improved in a country that strongly upheld democratic and human rights values.

"Indonesia declares itself a country that upholds democracy and human rights, meaning that [the tolerance rate] should not be just 9 per cent," Beka told the Post on Saturday.

In the study, other countries such as the neighboring Philippines, the US, Canada, the United Kingdom, Spain, France and Germany all ranked higher in LGBT tolerance, with at least 70 per cent of respondents in favor of accepting homosexuality.