SHAH ALAM - One of the women on trial for murdering the North Korean leader's half-brother was filmed on CCTV apparently practising on another person two days before the assassination, a court heard Tuesday.

Vietnamese Doan Thi Huong was filmed at the airport where Kim Jong-Nam was killed approaching someone from behind and gently wiping something on their face, a police officer testified.

It happened in the departure hall of Kuala Lumpur International Airport's budget terminal, the same area where Kim was murdered.

But officer Wan Azirul Nizam Che Wan Aziz said the approach in that footage was gentle, in contrast to the "quite aggressive" fashion in which Kim was attacked as he waited at the airport. 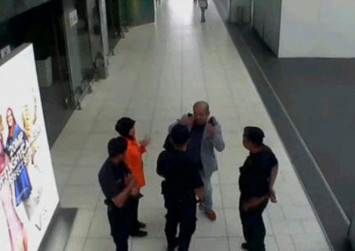 Huong and Indonesian Siti Aisyah, in their 20s, are accused of killing Kim on February 13 by rubbing the nerve agent VX on his face in a Cold War-style hit that stunned the world.

The women, who were arrested a few days after the killing and face death by hanging if convicted, have pleaded not guilty to murdering the estranged half-brother of Kim Jong-Un.

The defendants say they were duped into believing they were taking part in a prank for a reality TV show, and their lawyers blame North Korean agents for the assassination.

On Tuesday the police officer described to the High Court in Shah Alam, outside Kuala Lumpur, how Huong was filmed on February 11 apparently carrying out a practice run before allegedly killing Kim.

He said she appeared to choose a member of the public at random and wipe something on their face from behind in a gentle fashion.

"When the person turned to her direction, the accused Doan seemingly apologised," he said.

She "bowed her head slightly and put her hands close together in the direction of the person", he added.

The officer said that, in contrast, the footage of Kim being murdered was "quite rough, as if like an attack".

"The action was quite aggressive," he said, adding that Huong hurried off afterwards.

Prosecutors previously told the trial that the women carried out practice runs before assassinating Kim.

Earlier, government chemist Raja Subramaniam said that only a small amount of VX - but more than enough to kill him - was found on Kim's face.

VX is listed by the United Nations as a weapon of mass destruction, and Kim died in agony shortly after being attacked.

The women are accused on the charge sheet of committing the murder with four other suspects, who have not been named and are still at large. Four North Koreans fled Malaysia on the day of the murder.

The assassination sparked a fierce row between Malaysia and North Korea, which is suspected of ordering the hit. Pyongyang denies the allegation.