Airport Armed Police Battalion has stepped up security following an attempted plane hijack on Sunday. The photo was taken near the Shahjalal airport yesterday.

Polash Ahmed, who allegedly attempted to hijack a Biman flight on Sunday, boarded the plane at Hazrat Shahjalal International Airport with no red flags raised at the security checkpoints.

No pistol was detected and no suspicious behaviour was noticed when he made his way through metal detectors and his luggage passed through X-ray scanners at the entrance to the terminal and at the boarding gate.

There was no flaw in the security system of the airport, claimed officials at a joint press briefing yesterday.

"Today [yesterday] we have showed you how a passenger has to go through security screening after entering the airport terminal and before boarding. There was no security hole at the airport through which a person would be able to get aboard an aircraft bypassing security checks," State Minister for Civil Aviation Mahbub Ali said during the briefing at the airport. 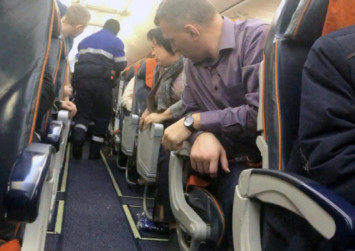 "We have checked all our airport security scanning system, we didn't find any flaw …," he added.

Yet the question remains as to how the suspect got on the plane carrying what passengers and army officers claimed was a pistol.

A pistol was recovered from Polash's possession during the commando operation that ended with him being killed at Chattogram airport and police said they were not sure whether it was a gun or a toy.

Toy or not, this incident could have far reaching consequences on the Civil Aviation Authority of Bangladesh which itself is trying to be elevated to category-1 from category-2 of the US Federal Aviation Administration so that Bangladeshi carriers could fly to the US.

Aviation experts said the incident would send a negative message to western countries who are already critical of the security standards being maintained at the airport.

Director of Hazrat Shahjalal International Airport Group Capt Abdullah Al Farooq talking to The Daily Star yesterday said a passenger, be it domestic or international, and his or her belongings have to go through several checks, including walk-through metal detectors, hand-help metal detectors, dual-view scanners, and explosive trace machines

All the while he or she is under CCTV coverage.

"While entering the airport, the passengers' luggage is checked in the heavy luggage gate. Later, he or she is thoroughly checked at the anti-hijacking point before entering the holding lounge," said the director.

During yesterday's briefing, Civil Aviation Secretary Mohibul Haque said they went through the CCTV footage and have become sure that the suspect did not have anything resembling a pistol on him or inside his backpack.

HOW HE WENT IN

"Eight to 10 passengers, including the suspect, boarded the aircraft from the domestic terminal. In the CCTV footage, it was seen that there was a bag on his shoulder and it was checked by Ansar members with a scanning machine. The scanner did not show anything [like pistol] and no red light was lit [to alarm security officials]," Mohibul said.

He said they checked whether the scanner was functioning properly.

The CCTV footage showed that the suspect reached the airport around two hours before the flight. Wearing sneakers, a T-shirt, and apparently jeans, he entered the domestic terminal complying with all security checks there.

"While he was outside and inside the building, he looked very tensed and distressed," said an airport security official who had seen the CCTV footage. He was seen waving the air ticket at times when he was wandering.

An Ansar member on duty at the entrance had checked Polash's body with a handheld metal detector. The black backpack he was carrying went through X-ray scanners, the official said.

Around the same time, several uniformed members of security forces also entered the airport after getting screened and Polash was nonchalant.

HOW DID IT GET THROUGH?

As journalists asked how Polash got a pistol in the plane, the state minister, the secretary and the CAAB chairman, said they would know after the probe ends.

The probe body, formed by the civil aviation ministry on Sunday, was asked to file its report within five days.

Asked if it was a pistol or a toy, Mohibul said, "The investigation will be able to reveal this.

"They [the probe committee members] are scheduled to go to Chattogram today [yesterday] to talk to the pilot, cabin crew, and passengers of the plane. They will also inspect the aircraft," he said.

The CAAB chief said gunshots were heard midair and the crew members said they saw the smoking gun "but it doesn't prove that it was a pistol because we are yet to find bullet holes or shells inside the plane".

"Some toys look like real guns, can make realistic sounds and create smoke," he said.

On Sunday, he said the suspect could have gotten the pistol from others at the holding lounge. 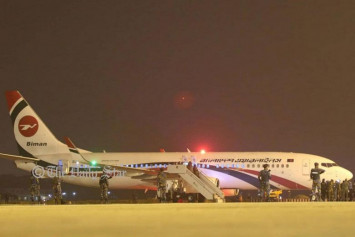 "It is totally fake. We are sure he made it with wires and circuits [PCB]," he said citing Rab's bomb disposal unit.

Biman's flight BG-147, a Boeing 737-800 with 143 passengers and seven crew members, made an emergency landing at Shah Amanat International Airport in Chattogram.

After a two-hour stand-off, Polash was killed in a commando operation in the plane.

"The airport operations are running smoothly today [yesterday]," he said, adding that security has been beefed up.

Meanwhile, a case was filed last night in connection with the plane hijack attempt.

Quoting cabin crew and passengers, the case statement reads that the suspected hijacker attempted to enter the cockpit 15 minutes after the plane took off from the Dhaka airport.

"He was seen carrying bombs and arms-like objects at that time," the statement read.

Midair, he shouted that he had some demands that the prime minister needed to be heard, or otherwise, he would destroy the aircraft with explosives, the statement read.

"Then he exploded two cracker-like objects inside," the statement said, adding that it created panic among the pilot, crew and the passengers.

The complainant claimed he was on-duty at the time and heard about the situation over walky-talky.

"I monitored the conversation between the pilot and air traffic controller. I informed the matter to everyone. The airport manager then asked security officers, armed police battalion and Ansar to go to the runway," it read.

The aircraft landed around 5:41pm. Passengers and crew got out of the aircraft through the emergency exits.

Zahidul Islam, assistant commissioner (Patenga zone) of Chattogram Metropolitan Police, said the body of the suspect had been handed over to them.

"No evidence or anything else has been handed over to us," he added.