Soldiers disinfect the streets of Taipei’s Wanhua district, which is home to scores of hostess teahouses.

The teahouse culture in Taipei’s Wanhua district is responsible for the recent spike in Covid-19 infections, official figures suggest.

In just 10 days, close to 900 people in the district tested positive for the coronavirus and at least 516 of them were linked to one or more of its 176 hostess teahouses.

Taiwan has reported 1,577 locally transmitted Covid-19 cases since May 11, according to the Central Epidemic Control Centre.

The Wanhua cluster dates back to May 11 when a man from Luzhou who had visited the district tested positive. The next day, two women from separate teahouses were reported to have contracted the disease.

On May 13, three women from three other teahouses, and a man who had visited one of them also tested positive, the centre said.

As the numbers rose, Taipei Mayor Ko Wen-je ordered all teahouses to close.

“There were human-to-human contacts between the Wanhua cases and the Luzhou case,” Health Minister Chen Shih-chung said on May 13.

It was later discovered that a number of people, mostly men, from other Taiwanese cities and counties had patronised the Wanhua teahouses.

“Our research showed that the virus strain tracked from the infected people came from the same family – the British variant,” said Chang Shan-tsun, head of the centre’s advisory specialist panel, adding that people aged between 50 and 60 were most affected.

A police officer, who spoke on condition of anonymity, said the hostess teahouses in Wanhua dated back to when then Taipei mayor Chen Shui-bian shut down all licensed brothels in 1997. 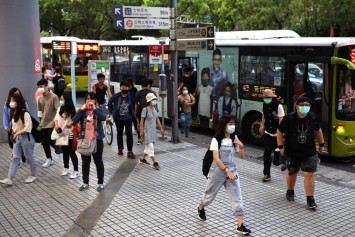 “Many [brothels] went underground after the crackdown while others reopened as so-called teahouses,” he said.

“Because a number of these teahouses are a front, most of the hostesses are not willing to take Covid tests for fear of being caught and fined,” the officer said.

Also, some of the hostesses were from Vietnam or mainland China and did not have the right papers so would not want to be identified by taking a Covid-19 test, he said.

A 70-year-old woman who worked in Wanhua was found dead at her home on Monday (May 17), Chen said on Thursday.

The woman, who lived alone and had heart and vascular problems, showed Covid-19 symptoms on Saturday but refused to go to hospital, he said.

Mayor Ko urged people who work for or have links to the teahouses or other illegal entertainment venues to take a Covid-19 test to help prevent the disease spreading further. They would not face punishment, he said.