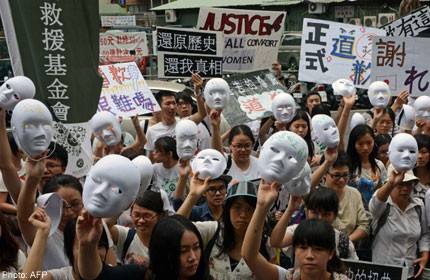 Supporters display masks as they demand an apology from Japan over the comfort women issue during a demonstration in front the Japan Interchange Association in Taipei on August 14, 2013.

"Justice for all comfort women", read one placard, while another demanded: "Return my dignity".

Women's groups in Taiwan demonstrate against Tokyo every year around the anniversary of Japan's wartime surrender.

"We urge the Japanese government to sincerely apologise," said Kang Shu-hua, director of the Taipei Women's Rescue Foundation which organised the protest.

"Don't think they can get away with it after the elderly 'comfort women' pass away as we will continue to seek justice for them," she said.

Historians say up to 200,000 Asian women, mostly from Korea but also from China, Indonesia, the Philippines and Taiwan, were forced to serve as sex slaves in Japanese army brothels during the war.

Over the past 20 years, 58 former Taiwan "comfort women" have died, leaving only six known survivors.

The surviving women, now in their late 80s, were unable to attend the protest due to poor health, the foundation said.

The issue of comfort women and a Japanese apology remains politically charged.

But in remarks in 2007 that triggered a region-wide uproar, Abe, who also served as prime minister then, said there was no evidence that Japan directly forced women to work as sex slaves.

Hashimoto drew ire earlier this year after suggesting that comfort women served a "necessary" role in keeping soldiers in line during the war.

He insisted Japanese soldiers were not uniquely guilty, claiming systemic trafficking for sexual purposes by armies around the world.

The Japanese Supreme Court in 2005 rejected a compensation claim of 10 million yen (now $100,000) from each of seven Taiwanese women and their demand for an apology.