Taiwan defence minister resigns after only six days on the job 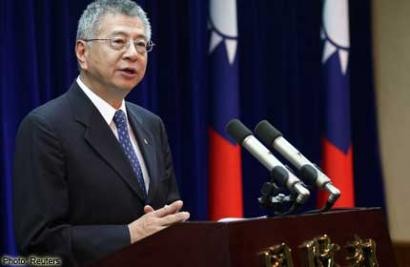 Andrew Yang (above), who was appointed only last week, tendered his resignation last night due to a plagiarized article in a 2007 book he wrote and edited.

TAIPEI - Minister of National Defence Andrew Yang, who was appointed only last week, tendered his resignation last night due to a plagiarized article in a 2007 book he wrote and edited.

At a late night press conference, Yang stated that he tendered his resignation to the president at around 7 p.m.

He explained over his misconduct of a plagiarism incident relating to his article.

"I realised that a ghostwriter I hired (for a book) plagiarized content from a scholar's dissertation. My mistake has tarnished the president's reputation and my own image. I take full responsibility and leave the post."

According to local reports, Yang's plagiarized article appeared in his book "Prepare for D-Day".

"President Ma Ying-jeou and Premier Jiang Yi-hauh will discuss the appropriate candidate and announce his or her appointment as soon as possible," Lee said.

She did not respond to whether the president tried to persuade Yang to stay on.

Reports speculated that internal conflict has remained rife in the Ministry of National Defence (MND) since Yang took over.

Yang took the post on Aug. 1 following the resignation of Defence Minister Kao Hua-chu, who stepped aside following the controversy surrounding the death of Army Corporal Hung Chung-chiu.

Yang had promised on the first day of his appointment that a case such as Hung's would never happen again. If it did, he said, he would resign from his post.